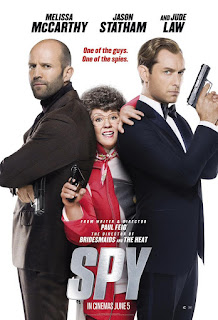 A former spy tied to desk duties volunteers to go undercover by infiltrating the world's largest arms dealer and to avenge the "death" of her field agent.

After having her cover blown on the plane as the random friend who saved Rayna's life, Susan flips the script and forces her to believe that she was hired to protect her.

"How about we just get a face-off machine, and I just get a new face!"

"Nothing kills me. I'm immune to 179 different types of poison. I know because I ingested them all at once when I was deep undercover in an underground poison-ingesting crime ring."

Spy really took me by surprise. It really, really did. I didn't expect the film to be such a good one, nor such a funny one. I still remember seeing the trailer on television and thinking, "ehhhh, whatevs". Again, so wrong. Lesson learned. Orrrrrr, maybe just a really bad trailer.

Nonetheless, Spy takes all of the spy and recon films and does comedy the right way. From the silly action moments, the over-dramatic scenes and characters, to the death-defying issues that spies encounter and survive, the film pokes fun at it, while still delivering it's own plot that makes the film unique.

Melissa McCarthy was really good in this film, however, it was Jason Statham who stole the film for me. Easily, for me at least, the best character and film I have ever enjoyed him in. His quotes all movie-long were just downright hilarious.

All in all, not a classic, but it's a film that is worth a good watch if you have some free time.