All In On Porzingis 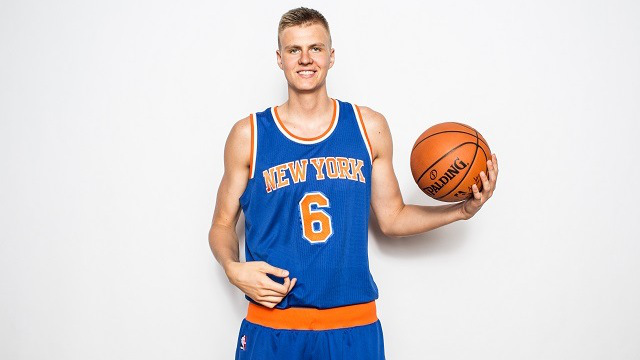 Okay, I am officially throwing this out there - I am a big fan of Kristaps Porzingis. Huuuuge fan.

I'm not sure what it is, but Porzingis, thus far, seems like exactly the type of guy New York Knicks fans deserve after years of suffering. And to be quite frank, I'm just a fan of everything that is Porzinigis. I'm all about his potential. I'm all about his personality. I'm all about him embracing and wanting to play and win in this wonderful city of New York.

Was it love at first sight? Possibly. On draft night when the typical "look-at-me-clowns" booed and jeered him, Porzingis handled it perfectly. Acknowledging that he will turn all of the criticism into applause. I loved how silly it all was.

Especially, the evidence of how quick we are to proclaim an athlete a bust. Or the stupid stereotypes we have for European ballers. He's either Dirk Nowitzki or Andrea Bargnani. And of course, the typical American-bias used when we assume guys we've seen play in college basketball are automatically better than talent overseas. I was just drawn to the entire underdog concept of our pick. It pulled me in and made me root for this kid even more.

And yes, part of that is from the sheer fandom desperation of needing this pick to work out.


[Side Note: I hope the guy that booed him just to get on television that night is forever brought up if Porzingis becomes an All-Star player. I'll forgive the kid who "fake cried". We all do stupid things as kids, especially when led by clowns.]

Of course, there were the talking heads like Stephen A. Smith who went all out in his typical, overblown, hyperbole rant and overreaction to the pick. By the way, Smith is now backtracking on his statements, claiming his issue is with Phil Jackson's bid to rebuild, and not to win now. Yeeeeeah, whatever Stephen A. Whatvevs, dude.

Also, there was that awesome Latvian rap video that is oh so worthy of watching. Krisssssstaps Porzingis! The likeness meter on this kid just continued to soar after this. Come on, how many people have Latvian rap songs made about them? And with a sick beat, nonetheless!

And of course, and most importantly, now the big fella is playing in real games against legit NBA talent and thus far, barring any catastrophic injury, looks like he can be something very special as he develops and matures.

Underdog. Poise. Potential. Rap videos. Whatever it is, I am throwing my endorsement onto the big fella. It's been a long time since I had a favorite New York Knick. He's now it.

I'm all in. Krisssssssstaps. Porzingis!