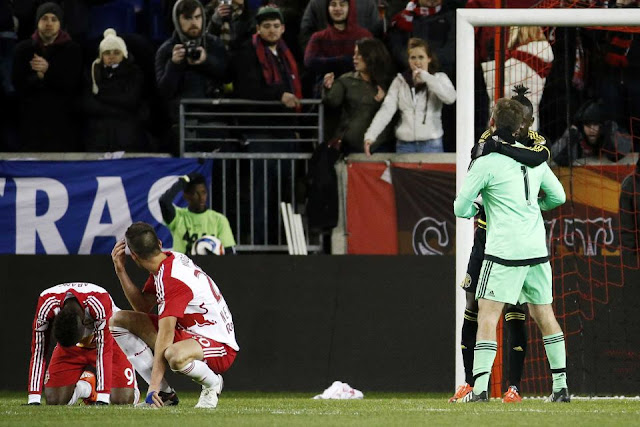 That's really all I can muster up after the New York Red Bulls fall short yet again after a splendid season that included the second Supporters Shield. Despite digging ourselves in a huge hole in Columbus by giving up a goal in the first nine seconds of the first leg, another in the final seconds, and never being able to put up the all-important road goal, I didn't lose hope. Even until the very end.

I guess that's why this loss hurts so much.

After a season that began with town meetings and a fanbase thoroughly upset with the firing of Mike Petke (as was I) things did not look good. There was NYCFC entering hte market, and of course the big question of "how good are we WITHOUT Thierry Henry?" I will openly admit, I was wrong about Ali Curtis and Jesse Marsch. They had a vision, a philosophy, a style of play, and stood behind it. And as we now see, it worked. Big time.


This season was absolutely fun. Lots of goals. A great pace on the field. And of course, I loved the approach of going with youth over the high priced old imported players (looking at you NYCFC).

After being in the building, in box seats nonetheless, for the 2nd leg of the Eastern Conference semi-finals against DC United, I really thought this could be a special year. Possibly the year we hoist the MLS Cup for the first time ever.

Red Bulls threw everything forward, and it made for one frantic last minute of play. WATCH: https://t.co/yY42L5Udhr
— FOX Soccer (@FOXSoccer) November 30, 2015

Instead, we played lousy in two legs against a strong Columbus team. Poor passing within the box and a ton of ill-advised turnovers were the absolute downfall. But here we are. Another heartbreaking conference final loss.

And a loss only inches away from a possible different result. So close. So damn lose. Off the post. Off the freakin post. Ugh.

But that's sports. And that's New York Red Bulls fandom. So it goes. That insane last minute wraps up my support of this club thus far.

Regardless, I'll be back to ride with these Bulls again next year, once again wishing, that it'll finally be our year.