Dome Pondering Movie Review: Me and Earl and the Dying Girl (2015) 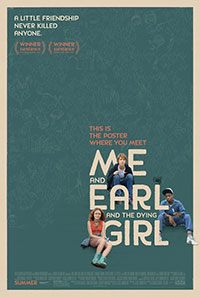 A teenager who spent most of his high school career trying to play it safe by not befriending anyone to have anyone hate him, has his outlook changed forever after befriending a classmate who has just been diagnosed with cancer.

After hanging out for a while, the three of them go and get popsicles and hang out without making things weird about her illness, or trying to define friendships.

"We make films. We've been making them since we were little."

I didn't read the book, so I went into this one blind. The title and description sounded like a film up my alley, and many gave it great reviews. However, for some reason, Me and Earl and the Dying Girl just didn't connect with me the way I thought it would.

First, the way the film is presented is indeed pretty cool. From the narration, to the snarky subtitles such as, "201 days into doomed friendship", the film has a nice balance of seriousness and humor. Also, Thomas Mann did a fantastic job as the lead character in the lead as "Greg". And of course, the character of "Earl" is just so funny and legit.

With that said, again, for me, the story just didn't overly connect with me. I received the message of opening ones self to friendships, and how we each can change one another, but I guess I just had high hopes for the film.

Regardless, I would still recommend this one. It's a good movie. And maybe, just possibly, you may get more out of it than I did.