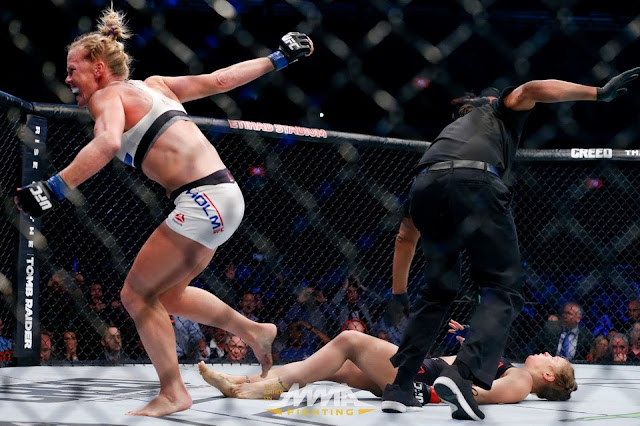 Is it possible to be shocked even when you expected the outcome?

That's exactly how I felt this past Saturday night after watching Ronda Rousey receive that devastating kick to the jaw that dropped her heavily, taking her invincibility and reputation with it. I am not looking for praise or attempting to humble-brag, but I did see Holly Holm walking away as the one to take down Rousey. Yes, for you pro wrestling fans, cue your inner Paul Heyman - the one in Rousey's 9-1.

Holm's background of being a very skilled boxer and kickboxer lend to the strengths of what many believed was the way to beat Rousey. It reminds me of the years when boxing was fun (remember those?) and the draw that Tyson was. The game plan was the same - control the pace and the fight. Holm did both, obviously frustrating and at one point, infuriating Rousey.


Holm deserves this. And quite frankly, anyone who thinks Rousey is "finished", "washed up", or "overrated" is obviously not paying attention. There is indeed a great opportunity for a rematch once Rousey is ready, especially if Holm is still champ by then.

Speaking of, for those who came away with taking shots at Rousey, I could not disagree with each of you more. I applaud Rousey for everything she did for the sport of MMA - especially women's MMA. She's taken the realm further than Gina Carano or Christiane "Cyborg" Santos ever have. Most importantly, she's sparked a fire in women to compete and to be bold and brave, especially after her "DNB" comments, which I am totally in support of.

The greats lose because they fight the best. Even Ali lost. And Rousey, after everything she is and became, ran into a better fighter in Holm. This only helps the sport, and raises everyone's game. I for one cannot wait to see Holm fight again.

This is Holm's time. And deservedly so. This only helps the sport. It helps the star that is Rousey. And of course, brings to the forefront another super talented women's athlete in Holly Holm.