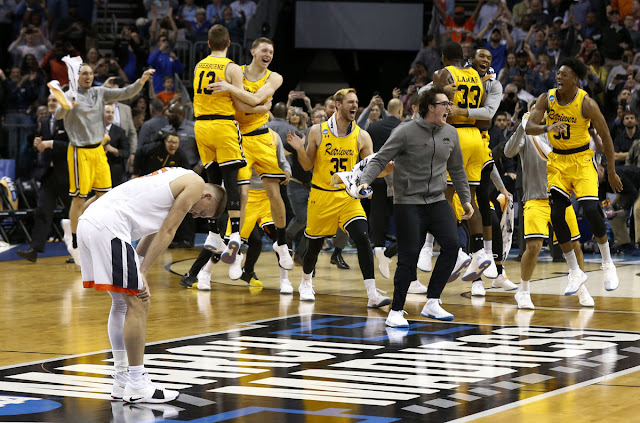 1. UMBC - I'm really struggling to watch these tournament games. The games have been entertaining, but morally, I can't stomach the exploitation of these young men (more on that some other time). Regardless, kudos to the young men of UMBC who made history this week. I'm thrilled to see such a program make headlines, and of course, for a coach from the DII and DIII ranks who did it the right way.

2. UMBC Social Media Team - Yo, whoever is running the UMBC Twitter following their defeat of Virginia deserves a raise. There was some serious shade being thrown, and to be honest, everyone who was in their way in some ways, deserves it.

3. 2018 Paralympics - Oddly, I watched a tremendous amount of these games and was totally in awe of the athletes. Shockingly, the hockey games were super entertaining to me. So much love and credit to those who participated, and even more importantly, continue to persevere despite disabilities.

1. Florida Bridge Collapse - So sad. I can't even imagine the thoughts of those who barely escaped this catastrophe. Such a brutal reminder that we can go at anytime.

2. Danry Vasquez - This dude is such a scumbag. The video of him smacking is girlfriend around in the stairwell was hard to watch. Men like this really do make me angry. Pathetic.

3. Toys R Us Closing - Man, a trip to Toys R Us was everything as a kid. Even when I knew I couldn't buy or afford anything. Just walking through it was awesome. Unfortunately, the world has changed, and even the way kids entertain themselves. I'll miss that for this next generation, and of course, those awesome jingles. As an adult, I also feel for the 30,000 employees who will soon be out of a job so suddenly.

1. March Madness Media - It's tough watching the dynamic of grown men have media access to 18-21 year old kids following these emotional games. Why is this even a thing? Why aren't these kids protected? It's the least the NCAA can do.