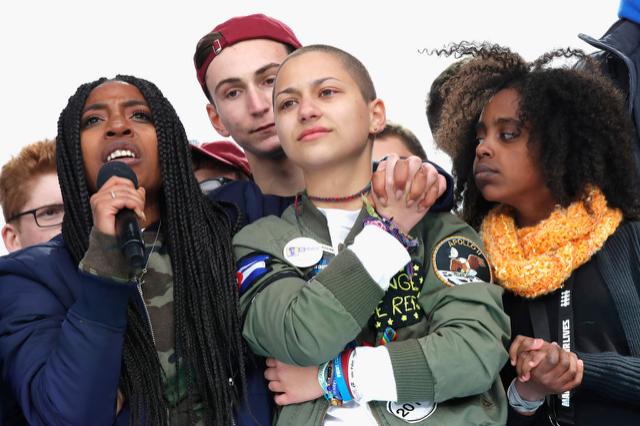 1. March For Our Lives - I honestly wonder what side of history many of those who are skeptical about these kids and this generation will be on? Saturday's turnout was unbelievable, and of course, so empowering. Also, so much respect to the youth of today who are leading this charge. I defend the current and next generation all the time, and it's days like yesterday which are evident of such defense.

1A. Emma Gonzalez - This girl is so bad ass. Her handle on speech rhetoric is amazing for such a young age. Her poise and fearlessness is even more admirable. As stated on Twitter by yours truly - so in awe.

2. Loyola Chicago - I refuse to use the term "Cinderella" or "underdog" here. Because quite honestly, it's only so when a handful of programs are constantly on National Television or even discussed by the so-called "experts". Regardless, glad to see programs that do it the right way get rewarded, and of course, who can resist the Sister Jean storyline?

3. NBA Feats - LeBron James had seventeen - SEVENTEEN - assists and no turnovers earlier this week. Dwight Howard, matched him with a 30 Point-30 Rebound performance. Two incredible feats taking place in the back end of the NBA season.

1. Stephon Clark - Such a shame. Add "your own backyard" to the list of places black men can't be safe from police shootings. And 20 bullets? Seriously? But you know, Kaepernick taking a knee is disrespectful to [fill in whatever excuse to avoid the real discussion] - damn whatever he was trying to bring light to. America, sometimes, man...

2. Transgender Ban in Military - I'm not sure what it is with this President and his need to put this particular ban in place, but it's on par with most of his social issues. I just don't get it.

3. CNN - Look, it's rather apparent that I'm no fan of the President, but I call it like I see it, the latest interviews with Karen McDougal and Stormy Daniels is pretty far reaching. I get the connection of bullying behavior, and a possibility of legal ramifications, but CNN, news, and journalism went to a low this week for their own agenda. Not a fan. At all. CNN took a huge L this week.

1. Rick Santorum - This dude really suggested kids better use their time in taking a CPR course? It's been pretty amazing and rather easy to see as of late who the NRA has on their dime by the stupidity and moronic comments being thrown around regarding gun control discourse.