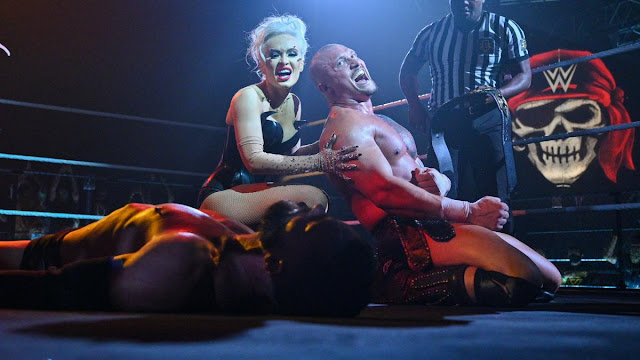 After an extraordinary Night 1 of NXT, and really of everything that will be this Wrestlemania Week and re-acquainting to this crazy fandom that is pro wrestling, I was ready for Night 2. How could they top it? Quite frankly, how could anything top what we saw from Night 1? I really, really, hold it in that type of reverence and enjoyment - just that good to be honest.

Well, Night 2 was good. No Night 1, but still entertaining...just my opinion. It also made me wonder whether two nights were needed for NXT. Again, not bad, but it's hard to surpass - but yeah, you get the point.

Nonetheless, here are some quick thoughts on Night 2:

- I have no idea who "Poppy" is, but you know what? I sort of dug the opening musical acts for NXT. Music and pro wrestling have always been an interesting blend because it's always a mixed bag of interest. However, this was cool - it just fit the vibe, and again, WWE's production carried it.

- Speaking of the production (yes, here I go praising them again), one of my enjoyments of the NXT brand over the main roster brands (is that the structure still?) is indeed the camera shots. It's rather easy to quickly pick up, but some of the shots and feel of the visual for the viewer were spot on and made for some important communication for entrances and storylines throughout the two nights.

One of the more significant shots was the entrance of Finn Balor standing on the ramp and staring into the ring at Karrion Kross who had a shadowy gloom hovering over him - they held the shot for a good 5-10 seconds. The shot could be construed as organic, but that is definitely by design.

Also, the constant camera cuts on Raw and Smackdown in my opinion make the viewing experience unbearable - I know, that may just be me, but I'm sure there are some of you reading this that may agree with me.

- El Hijo de Fantasma! Now Santos Escobar was a nice little surprise to start Night 1. Actually, so was the former DJZ of TNA/Impact fame. Again, just a returning fan here that hasn't watched the WWE product closely for several months now. It's reallllllly weird to see so many familiar faces in this new environment. It also gives a sense to the crazy amount of talent stockpiled under the WWE umbrella.

- With no background on the Cruiserweight championship title match, it was easy to see that they were going for an HBK vs. Razor Ramon - who-is-the-real-champion shtick here. I enjoyed the match, as both men really delivered an entertaining bout. Jordan Devlin's moonsault was a thing of beauty! The finish was really cool as well.

Again, the camera shot positioned right behind his fall...so good.

- NXT has Women's Tag Team Championships now - that's a nice surprise. It's good to see the women have opportunities on the black and gold brand as well. It also makes you realize how ahead of the curve TNA was back in the day...

- My second favorite match of the two-day NXT-welcome-back-to-WWE-binge was the bout of Bronson Reed and Johnny Gargano. Gargano has always delivered. Reed, a newly adopted favorite of mine after Night 1 also proved my new fandom to be that of a good selection. I have no idea what the weekly NXT show is like, but I would like to see this program continue.

- I had these thoughts during the Women's Tag Team Championship in seeing Ember Moon back in NXT, and then watching the awesomeness that it appears Finn Balor was allowed to be once again on this brand - are these wrestlers being sent back as "development" (ala minor league assignment), or do we consider this a relocation where management believes the brand brings out the best in the specific talent?

If it's the latter, isn't that a good thing - meaning a true difference in feel and philosophy for each brand? And if it's the former, well, why are these talents more marketable in development than on the big show(s)?

Regardless, the ending here was cool with Kross hammering shots to the back of Balor. Finishes that feel real, as in seeming believable in a real fight, always connect with me more than the flurry of spirited back-and-forth that has been overdone in today's environment.

Kross is a believable badass, and Scarlett who is tremendously easy on the eyes, adds to the character package. Looking forward to more.

- I typically dislike "Unsanctioned Matches" or "Lights Out" matches or anything under this sort of description that the company has "nothing to do with the contest". The reason being is that it often is billed as such, but then we get all the bells and whistles of a normal contest. It's in the details for me, and pro-wrestling has done little to evolve beyond doing typical pro wrestling-y things for new fans. These scenarios are just an example of it.

I thought NXT did a good job here of making this feel unsanctioned. Having the referee in all-black and not the traditional stripes added to it. But that went out the window once Cole decked him and he just woke up and well, officiated the contest. Yes, that bothered me. Is he being paid for the contest? Doing it as. a favor to both men? It is unsanctioned, so did he have to continue officiating?

Yeah, it really bothered me. Again, there are too many options in entertainment with intelligent and thoughtful drama and storylines as competition. Wrestling needs to push the walls of the box outward just a bit more.

Another thing that bothered me while I'm at it - Cole smashed O'Reilly with a TV and we just moved on. I just didn't get it. But whatevs...

The battle between O'Reilly and Cole was nice. At times it felt like a wrestling match, and at times, it felt like two dudes with true hatred for one another - I'll take it. The finish with the chain around the knee and the steel chair was great. Ultimately, the shot of O'Reilly staring at Cole being attended to in the ring told more of a story than the actual match. Regardless, job well done.

So yeah, it's no Night 1, but it was still entertaining. Nonetheless, I'll be setting the DVR for Tuesday nights.