Wrestlemania 37 (Sunday) Review - "A Sign of the Times...Served It's Purpose" 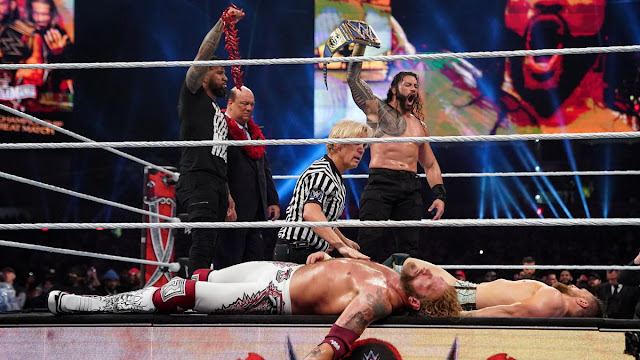 Well, it's time to wrap up this long week of pro wrestling. One final night, typically just Wrestlemania, but now the last installment of all that wrestling goodness! And quite frankly, I more open to committing to two nights of Wrestlemania that are wrapped nice and tight and constructed for three-hour shows, rather than the never-ending marathon that recent one-day Manias have become.

Under this format, there is an energy and focus allowed for each night attributed to the viewer. And the product doesn't suffer from a completely burned-out crowd. But really, this is all obvious.

With that said, Sunday's showing wasn't as good as Saturday. If I could sum up my reason for that feeling - I just think looking back on Wrestlemania 37, Saturday's moments are what I'll remember, or remember first.

If I had to rank them, this is the order of enjoyment:

But regardless, the WWE still was spectacular over the course of the last four nights. They also continue to prove that no one does live entertainment quite like them, despite what the creative product is at the time.

I'm also thankful for the week, as the world needs this kind of entertainment - we're not completely out of this pandemic, and it is normalcies, or some resemblance of what normal once was, like this event, that can really lift the spirits of those engaging with it. There are so many people who don't get to walk in front of a camera who make that show happen, and this is my little space to express my gratitude to them as well:

- I hope we never have a Wrestlemania "host" ever again. Yes, that is how much I genuinely dislike the...whatever it is they are going for. And yes, I dislike Hulk Hogan that much more.

- Interesting move to kick off Sunday with Randy Orton vs. The Fiend. I actually had higher expectations for this than what we got. I know, that's silly, but unlike many, I do genuinely feel like there is a place for this alternate reality sort-of-stuff in pro wrestling. Just me of course, but I want larger-than-life characters.

But of course, I also believe when doing this stuff, it has to make sense. I don't understand any of this.

The character of The Fiend is indeed a unique concept. However, he's constantly billed as this terrorizing character, yet, loses quite frequently. And it seems he doesn't care.

The Alexa Bliss angle is intriguing, but that's all there was from this. Orton won with the RKO. They disappeared. Umm, alright.

And please stop with the red lights for The Fiend's matches.

- The Women's Tag Team Championship match was a nice way to get Tamina over...until she didn't triumph. Again, this one also just felt questionable and furthered a slow start. I also wasn't a huge fan of the win-today-wrestle-tomorrow concept we saw for this - and also in NXT for the North American Championship. This one was there, it just left more to be desired, I guess.

- As stated, I haven't seen much of the product coming into Wrestlemania, but Sami Zayn's conspiracy gimmick is entertaining. It's actually amazing to see these two guys still working with one another, and I had little doubt that this would not be good because of that past experience. This was fun.

Maybe this should have opened the show?

- Besides the main event, Sheamus vs. Riddle was my favorite match of the night. They were great! Nothing really else to say. The Brogue Kick to the face was awesome. Loved it.

It also adds something to see Riddle get kicked in the face. The character, at least for me, just screams, "please someone, just kick him in the face!"

- The Nigerian Drum Fight was as ridiculous as it is in the name. I applaud the WWE and the immense strides they've made recently as we've moved on from just watching white men wrestling for three hours. But, I still have no idea where to place my headspace when it comes to this match.

Ultimately, I'm happy for Big E, who always gets me amped. And for Apollo Crews, who seems to have finally found something to unlock his potential. I do dig the gimmick. This match just felt...awkward.

As for the dude from Raw Underground showing up, that's super intriguing. Of course, in the most pro-wrestling-y way, the WWE wants to act like we've never seen this dude before.

Maybe, they just want you to act like Raw Undeground never existed...I know I try to. 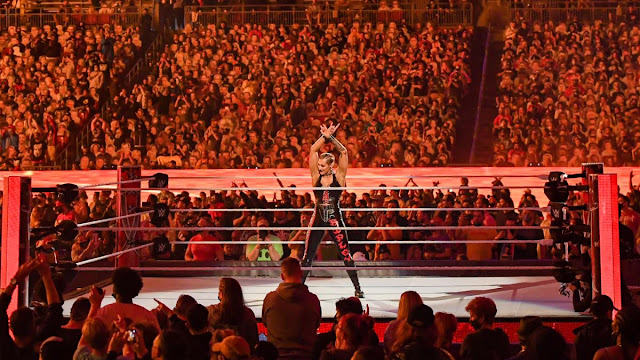 - The styles of Rhea Ripley and Asuka just jumped off the screen. So much so, that even my wife folding clothes next to me for this way, sat back and tuned in. As expected, this was a good one with the young Ripley getting what looks to be the first of so many good things to come in her career.

- The logo for Wrestlemania 38 in Dallas seems...unfinished? Plain? Lacking?

- Still can't believe Bayley was left off the card for two nights.

- The main event felt like a big fight, and that was something I wasn't sure would be there when I initially saw the card. Yes, that's why a backstory and a good buildup are sooooooo important - I was hooked after the video package, which was well done.

This was awesome. It really was. In referencing unlocked potential, Roman Reigns in this role is absolute money - dare I say, he's probably the best in the business right now. This match showed off so much of his range - a range that he probably didn't have before as well.

I loved the brutality of the ending. Easily one of my favorite matches of the year - thus far.

BTW again...you can't help but be happy for Edge and his journey back. It's remarkable.

Nonetheless, I enjoyed Wrestlemania 37. WWE did a great job historically tying 36 and 37 together for when we all reference back, it will be a sign of the times. It's a nice touch for the library, and really, it ultimately served its purpose for the here and present.

Again, kudos to the WWE. Now translate that energy to weekly programming, please.