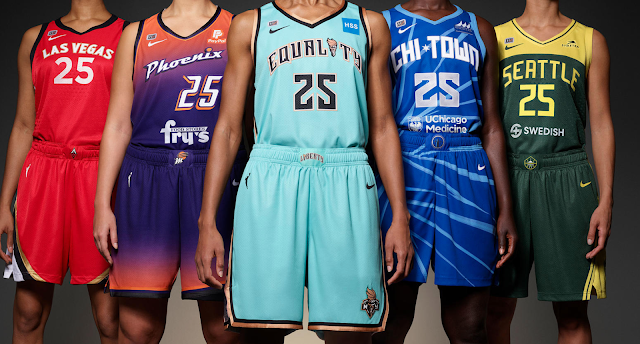 The NEW WNBA uniforms have been unveiled, and of course, I'm here to weigh in on the new look for the league. Powered by the creativity and design of Nike, the new designs drastically overhaul the aesthetic on-the-court look for all twelve teams and also changes the representation and aura of how the league is presented.

After all, let's be honest, the WNBA's uniforms have taken some major hits in the last few years. This is especially so as they increased the size and/or number of sponsorships to the jerseys to increase revenue. It reached the point where uniforms were no longer distinct to the brand of each team, and even more so, undesirable and unattractive.

The women deserve better. In this latest rollout that celebrates the 25th Anniversary (yes, 25 years already!) of the league, Nike crushed it. All of the looks are amazing.

Here are my takes on the latest sports threads:

Atlanta sports teams traditionally have had a sketchy uniform history - at least in my opinion. Braves, Falcons, Hawks, Atlanta FC, or the Atlanta Thrashers (remember them?), they all have had hit or miss looks. With that, nothing iconic or sleek has come from the crop - maybe the Falcons?

These quickly move up the ranks in Atlanta sports history. I especially love the red "Explorer" edition with the accent stripes centering the "Atlanta" and the number.

Candance Parker returns home to Chicago this upcoming season and I feel like the #3 black "Explorer" jerseys are going to be a hot item for the WNBA.

I'm not too crazy about the blue "Rebel" edition uniforms, an ode to the "Windy City". In a weird way, I don't hate them, either. They look and feel like the kind of uniforms that will play against whatever the other team is wearing, thus, resulting in an "ewww", or "huh, those are cool" feeling when worn.

The "Explorer" blue editions are sleek. Dallas is an interesting town where it seems like teams other than the Cowboys are always trying to draw from some historical aspect of the city - with all of them walking away with something drastically different.

The "Rebel" jerseys are another example of that with an ode to the military productions of planes in Texas during WWII. Again, it seems out of nowhere, but it's not bad. Could be better.

I was so underwhelmed by the "Explorer" jerseys here - I mean, those are basically the road jerseys for the Minnesota Timberwolves, no?! I'm also not a fan of cop-out designs for WNBA teams that resemble the NBA city-counterparts. It's lazy.

However, what saves the set here is the tremendous amount of detail that went into the "Rebel" jerseys. From the musical note font to the pattern of stars throughout, this is a good look! I just wish they added a bit of blue or green to make this pop. Maybe on the piping of the collar/shoulder?

The "Rebel" black jerseys are the winner here. Playing off the usual "PHX" moniker for the city, the "X" is highlighted in orange for an ode to the Mercury's fanbase nicknamed, the "X-Factor". Cool stuff.

However, the odd sponsorship placement is questionable.

These uniforms - these are proclamations. It’s the people who got us here. The home we represent. The family that won’t let us fall. pic.twitter.com/qMePI0ZVa4

But hey, whatever pays the bills.

It's got to be really hard to carve out a niche for women's basketball in the state of Connecticut by being something different from UCONN Women's Basketball, while you know, trying to attract that same fanbase.

Alas, these jerseys are reminiscent of that endeavor. The "Connecticut" looks very similar to that of Coach Auriemma's ladies, but with an infusion of Native American heritage. The bright colors are a nice touch as well as with the various patterns in the neck and shoulder lines.

And "Keesusk", meaning "Sun" in Mohegan, is really cool.

The "Explorer" red jerseys are nothing to get angry over. They're simple, classic, and get the job done. They easily give the team an identity without doing too much.

However, those green "rebel" jerseys are awesome. The gold and green are a great balance with the pattern on the lower left that adds depth and quality to the design. The details also give this jersey a VERY high-end feel. Vegas, anyone?

Washington Mystics
Much like the Aces, this set is also all about the "Rebel" design. Sure, the "Explorer" design, a concept they've worn prior to these remakes, is a solid one. They carry some good feeling and branding as the jerseys they won the 2019 WNBA Championship in.
But it's the "Rebel" jerseys and again, the detail in the "RISE" concept. Based on the 19th Amendment, this design literally has the words of the Amendment running through the jerseys. That's Awesome!

Indiana Basketball - no matter the team or organization, tends to always have good unis. Especially, the Pacers. This set just adds to it.

I've never seen Stranger Things, but through pop culture, I can recognize the dope ode to the show. These are sure to be the WNBA's most sold jerseys out of this collection.

There is just something so special about the elongated "L" for Los Angeles Basketball. The palm tree, the purple and gold, and the side-designs all make for dope jerseys.

I'm not sure what they were going for with the black and yellow galactic-looking design, but it sure feels like they were inspired by the Kobe Mamba Black Lakers uniforms.

The "Explorer" jerseys are a nice update to the green and yellow look we've come to expect from the Storm when they hit the court.

The "Rebel" jerseys are a nice ode to female empowerment and activism, something the city of Seattle knows too well. These jerseys act like black jerseys but carry a distinct darker green that upholds a closer tie to the team's brand. Love it.

Mayyyyyyyyyybe I'm a bit of a homer on this, but these are my favorite redesigns. Did you see the Liberty's uniforms last season?!!! Brutal.

Not only are these a drastic upgrade, but I think the Liberty has one of the most unique color palettes and looks in all of sport. Moving to the traditional "New York" across the chest is yes, classic, and a plus. But also, the "Rebel" jerseys sporting a built-in "Equality" across the chest is dope. With Lady Liberty's torch included. So dope.

**All photos courtesy of nike.com.