NXT Takeover: Stand and Deliver Night 1 Review - "You Got me!" 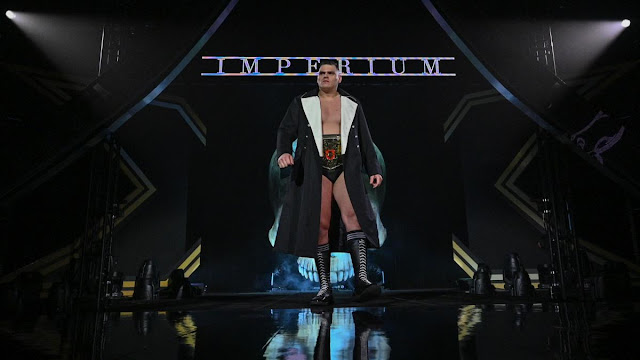 For someone who hasn't been engaged in WWE's product for most of 2021 (besides the Royal Rumble, maybe?), "Wrestlemania Week" hasn't felt "Wrestlemania" at all for me. No, I'm not looking to dive into a realm of negativity and soapbox ranting on bashing the WWE's product here. It's just that, for this loooooooong-time wrestling fan who loves everything that is the spectacle that is Wrestlemania, this week, has just been, well, odd.

However, as is custom with the things we love, I gave it whirl on the new Peacock platform, and figured, why not? Maybe the events will outdo the lack of interest? Well, I am very happy that I did.

Here it is, flat out, with no extra fringe with it - The NXT Brand is amazing! Yes, I'm late to the party on this, but what I watched last night on Night 1 of Stand and Deliver, was everything I enjoy about pro wrestling and everything I want out of it in the current age.

So yes, this review is coming from someone with fresh eyes on the product. And someone, who the WWE won back for Night 2, the rest of Wrestlemania Week, and for the NXT brand on a weekly basis.

Here are some quick notes from my perspective:

- The WWE NEVER fails in the production department. I say that in ALL of my WWE reviews, but it always seems like it's never enough. The Capitol Wrestling Center feels unique with the ramp set-up, the different sets (keeping events fresh), and the addition of the fence nearby. It has a cool, underground, yet old-school aura that is the perfect blend of the past and the current age of wrestling.

- Speaking of old-school, I just LOVE the idea of the dropped mic from the ceiling. It's simple, but it's a great visual for the championship introductions. Adds to the big fight feel we have several times throughout Night 1. And again, another old-school addition into a modern presentation.

- I've always been a big fan of Pete Dunne, and Kushida as well, from his New Japan days. Seeing this as the opener was a much-needed hook for this returning die-hard - so, kudos to you WWE. You got me!

I'm not sure who else is on the roster at NXT, but I'm sure having these two around presents so many more opportunities for must-watch scenarios.

- The Eliminator Gauntlet is a simple, yet, such an awesome stipulation for a match. There are so many variations of things you can add and create in this style of a match - essentially, without the Chamber structure.

I was introduced to Brandon Reed in this one and again, I'm a fan. One of the biggest things about NXT that felt rare is the believability and psychology of the matches. Reed jumping off the top rope for a simple splash SHOULD be a finish. No kicking out of that.

It was also nice seeing some of the old Impact Wrestling personalities in this one. Dexter Lumin and his character was one that I felt never got its run in Impact - it looks like it has the opportunity to do so under the WWE NXT banner. WWE and it's attention to details in those manners (when it wants to) feels like a better fit and environment for the development of "Dexter Lumin".

- I love EVERYTHING that is Walter. I've only heard about him, but now, I'm a huge fan. The dude is old-school heel in 2021. The look, the aura, the vibe, the entrance, the style - I'm enthralled by it all!

This might be my favorite match of the year thus far (don't @ me).

Ciampa is rock solid as usual. Loved them catching me up on the storyline of the progression of Ciampa into a family man. Great, great emotional stuff. Followed up with a good fight that was hitting with sound story-telling.

- How many championships are there in the WWE?! The United Kingdom title is cool...for WWE NXK UK. But what's the purpose of the North American championship? And the United Stat...errrr, you know what I mean...too many belts in pro wrestling right now. It's not at the absurdity of boxing, but it's on its way.

That's my old man rant for this one.

- A nice positive visual - and very much welcomed! - is the site of many people of color in the role of referees throughout the night. There is so much to unpack when it comes to diversity and pro wrestling, especially the role of race, that really has made strides over the past three to five years. Much applause all-around the industry.

- The tag team championship match was the typical craziness you now expect in pro wrestling today with all sorts of car-crash-shenanigans happening throughout the match. It felt common, but it was spectacular nonetheless. Glad to see the formerly named Rascalz, now MKZ, get the big win.

I was a little disappointed to see them hit "Hot-Fire-Flame" and it was kicked out of. Again, this is now the norm in wrestling...blah. Maybe I just liked the visual too much...it's possible.

- Stephanie McMahon is a great businesswoman - that's been lauded in many circles beyond my capacity. However, I'm still perplexed on how she is responsible for the "Women's Revolution"?!

The phrase seems so contrite and unintelligent at the same time. Of course, it ignores history outside of the WWE (not exactly surprising), but it also waves this large contradiction of historical measures for a company that has HAD control to offer those opportunities before.

Ok, sorry, that was the second soapbox rant.

- I didn't know anything about either woman headed into the main event. I remember Racquel Gonzalez from War Games and how she stood out in the awesomeness that was that match. She continued that "it-factor" (sorry, Bobby Roode) with Lo Shirai.

Again, this was an amazing show to kick off a week's worth of wrestling that will have wrestling fan's heads spinning by the end of the week.

All in all, WWE gained this fan back, at least for Tuesday nights for two of its 38478 hours of content per week. I'm kidding...sort of.