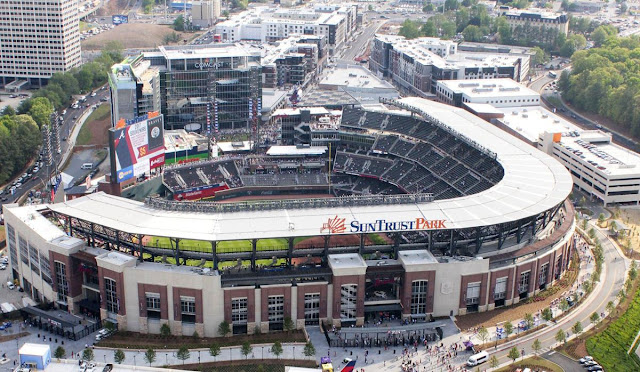 I've found myself engaged quite frequently with many individuals - from various areas and backgrounds - on the issue of race, class, politics, sport, and fitness. Naturally, working in sports will always mash these areas together for me, forever creating nuanced unpacking of the elements always in play - pun intended.

The latest discussion - Major League Baseball removing the 2021 All-Star Game from the city of Atlanta due to the newly passed Voting Rights Bill that is SB 202.

Off the reckoning the country is still attempting to work its way through, as well as the visible political divide that hasn't improved, entangled with the death and historical significance that is everything, Hank Aaron, MLB removing the celebration in Atlanta is highly significant, damaging, influential, and complex.

As per my thoughts in my Wild Predictions for the 2021 MLB Season, I felt this would be an issue, but I never really believed MLB would pull the trigger. MLB, historically a conservative sport that has rarely been on the forefront of social issues (maybe the last time being that of Jackie Robinson lacing up a pair of spikes to endure the burden of integration?), the league has recently taken an increased participatory approach in these matters. A lot of this is due to the new Player's Alliance (largely made up of players of color with overwhelming support from white counterparts) who now have a voice at the table of MLB's decision-making process.

Well said. Sometimes @MLB acts as if their hagiography of Jackie Robinson gives them a pass. Glad to see them step up!

Despite its growing advocacy, the shock of MLB leading the way in this measure has been heard and felt. After all, this isn't the NBA or the WNBA, leagues that push black agendas and equality freely, and athletes who challenge the structure and platform of being an athlete quite regularly.
No, MLB and the sport of baseball is an entity that is considered "America", and yes, in addressing the elephant in the sports room - the MLB is still very much considered white, conservative, and a part of the Americana that is currently being defended - or sought to "return to".

That's the truth. That's why this hurts for so many. That's why it is triggering. And that's why it is effective. MLB going to the other side is a huge blow, socially and politically for everything that is this current climate. Especially for those that have always embraced, identified, and expressed themselves with both.

For so many in opposition of MLB's recent decision, the call for boycotts, the cliche rants of "Go Woke, Go Broke", and the allegations of "Politics being too heavy in sport" are defenses to true matter of concern, the subconscious understanding that is the cognitive dissonance of the America they've known, the America that is, and now backed into a corner of defending a political positioning that is creating conflicting elements of in itself.

MLB "going woke" is a lazy narrative for this occurring. Among other things, the phrase "woke" has been played out for years. But I digress...

Politics has always been tied to sports for as long as we can remember, especially baseball. See Jackie Robinson, who baseball continues to hold in reverence as some type of "free pass" on issues of race and class around its game. The group that believes there is no place for "Equality" discussion in sports or on the playing surface is the same group mindset that even Jackie endured - a care only about the body in the uniform and not the lives beyond the field.

Politics in sport, in baseball, is as American as the game itself. A simple example of that, relevant to this situation, is in regards to the city of Atlanta and the fact of the (only) way the city could receive the Braves from Milwaukee is if it agreed to allow integration of spectators in its ballpark! That had to be used as a bargaining chip! That's politics and sports. That's sports pushing for equality.

For people upset about sports applying political pressure on states, it appears they’ve forgotten the only reason Atlanta even *has* a baseball team is because in 1965 the city agreed to integrate seating at Fulton County Stadium as a condition for the Milwaukee Braves to move.

Of course, there are so many other examples - feel free to do the research on your own. One of the easiest examples is the NCAA who single-handedly moved Southern States to remove confederate flags and symbolism by withholding NCAA championships from those areas. How about our beloved American religion that is the NFL? In 1990, the NFL moved the Super Bowl out of Arizona after it refused to acknowledge Dr. Martin Luther King Jr. Day as a National Holiday. Leaders from Arizona government now use Dr. King's quotes as freely and comfortably for their narrative as MLB does Jackie Robinson.

Sports has always been political. And history has often been in favor of these decisions.

It's also important to realize that this move was inevitable. If the Commissioner's office didn't pull the trigger following corporate pressure, this would have surely become a bigger swell from player and Union pressure. If the game remained in Atlanta, I just don't see many players or personnel being excited about participating in the environment. Before MLB's decision was final, Dodgers manager, Dave Roberts, already made his voice clear on the matter.

Of course, this move is also damaging to innocent people, even those it is attempting to advocate for. It will hurt plenty of local businesses in Atlanta, and through that, the economic means of the middle and lower-income demographical employment that make these events a success. It truly is a shame. Because again, as big money weilds it's political power - regardless of political side or positioning - the people lose.

Also, the move has some pettiness in it. After the Georgia senate threatened to take away a tax break for Delta in its opposition to the bill, MLB defended one of it's major sponsors by upping the level of petty with the reply of OH! you wanna take things away? Delta, hold my beer!

Again, this infliction point was written on the wall, this entire ordeal was just a matter of whether MLB would make the call, stay out of it altogether, or attempt some pseudo-diplomatic approach to appease societal noise, but adhere ultimately side with big money. You know, pretty much exactly what we saw the NFL do with Colin Kaepernick

And for the record, I do agree with MLB's decision. Again, I am so incredibly surprised that MLB took this route so quickly. Really, so definitively.

Baseball has a long-standing history of racial reckoning it must deal with - institutional, fans, culture, etc... Baseball is far from perfect. In fact, at the core, the sport feels like it is currently in an internal battle of wrestling with the long-standing male-white-culture that has dominated the game .

Yet, for a sport that has a day to honor a man who gave his life just to show us that integration and anti-racism isn't all that scary if we get past our own internal bias, it's remarkable to see "baseball fans" draw the line at this - THIS! - as what separates them from the game. Oh, they are moving the All-Star Game?! I'm so done with baseball!

As if Hank Aaron, who deserves every bit of adulation and celebration that is coming to him this summer, wherever the 2021 All-Star Game is hosted, would not have been against SB 202 and the sport - his sport and league- taking this approach.

The truth is, especially in this current empowering climate of athletes - more than Jackie, Aaron, Ali or others could have ever imagined - there are many who just don't like sports and politics mixing because it forces them to choose not just between sports and politics, but that of the uncomfortable cognitive dissonance of their long-standing comfort, and everything that once supported that comfort.

October 10, 2021
3 Up 1. Moderna Vaccine to Low Income Nations - In a world where the idea of "pandemic" now feels like a state of mind or the privilege of belief, Moderna has decided to aim its efforts in getting at least 1 billion doses to low-income countries the COVID vaccine. I'll save the "vaccine" chat for another time - but this is pretty awesome by Moderna. And oh yeah, highly needed.  2. Candace Parker and Diana Taurasi - Two absolute legends of the WNBA had some legacy-cementing moments this week. Parker lead her hometown Chicago Sky into the WNBA finals, and Taurasi, was named the GOAT of the WNBA by fans. Because well, she is. Congrats to both.  3. Netlfix's On My Block - For the second week in a row I'm putting a personal - and admittedly, biased - selection in the "Up" section. One of my favorite shows by Netflix, On My Block , released its fourth and final season, and yes, I binged it on my daily commute home. Gonna miss the crew from Freeridge.
Read more

Thoughts on MLB at Field of Dreams Game

August 13, 2021
"You'll REALLY like the film. It's a great baseball movie that touches on the father-son relationship - just...just a really good film."  Those were the encouraging words of my father-in-law in regards to the film, Field of Dreams, on the weekend prior to the MLB at Field of Dreams game in Iowa. There were among the few recommendations or positive reviews that I received as the fever pitch (no pun intended - and a terrible movie about the RedSox and Baseball - blah) built toward the game. I, a baseball fan, never saw the movie, or really, had little interest in it.  I finally watched it based on the nudges, excitable remarks, and surprisingly shocked reactions when I mentioned that I never saw the film. And of course, because it would be nice to have SOME context to why the game was special. For me, the film was. well,  it was just there. Good movie - great script for sure. I guess I just never got caught in the romanticizing of baseball that the film elicits for me.
Read more

October 17, 2021
3 Up 1. WNBA Finals - The WNBA playoffs are definitely going to be in the running for my Sporting Event of the Year Award. What a series! The Finals were capped off by an amazing game before a raucous crowd in Chicago. Kudos to everyone, especially the amazing story of Candace Parker returning home and winning a chip. Major props to Courtney Vandersloot.  2. New 2022 Quarters - Get ready for your money to diversify - well just a bit. But it's a start! Beginning in 2022, the US quarter coins will feature trailblazing American women such as civil rights activist; astronaut Sally Ride, the first American woman in space; Wilma Mankiller, the Cherokee Nation's first principal woman chief; Adelina "Nina" Otero-Warren, a leader in New Mexico's suffrage movement; and Anna May Wong, the first Hollywood film star of Chinese American descent.
Read more
Tweets by @DomePondering