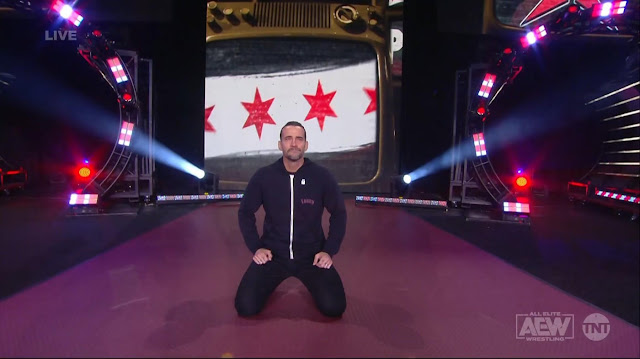 Looooooooook in my eyes, what do you see?!

The lyrics to Cult of Personality, especially that first bar,  never felt so fitting for CM Punk as it did last night.

For the most part, everything that is CM Punk's return to wrestling last night at AEW Rampage ties directly into my latest thoughts on pro wrestling - the company is making it must-see destination television, an element desperately needed from pro wrestling.

Last night was incredible as again, it was another moment that made wrestling feel alive - with a wild and energetic pulse. It was one of the coolest moments in pro wrestling that you knew was coming, expected, anticipated, and it was everything and more. Again, MUST-SEE television. That's hard to do.

For me, it wasn't just Punk's return to pro wrestling, but the mere presence and voice of his inclusion in today's space. We know that Punk can deliver on the microphone - probably his best and most signature attribute. We also know that yes, he can wrestle - we've seen it before.

However, Punk's presence is so vital not just to the current landscape of pro wrestling fandom and the changing space of "forbidden doors" and collaborations, and champions of other companies being on other television shows - pretty much, absolute chaos wrapped in freedom to the likes of the old territory days - but to AEW's continued ascension as competition (or not competition? Rivals? whatever.) to the WWE.

Punk is more than just a return that fans have wanted. Punk represents everything that is counter-culture to the WWE in today's world. He's the guy that embraced the big machine, rose to the top behind the fan's embrace and support in that machine, then was no more - at the obvious blame of the WWE. The company that in every way (oddly besides quarterly revenue) has endured recent declining support, enthusiasm, and interest from fans.

For some fans, the WWE, the industry leader - and typically the setter for industry culture among casuals and mainstream media outlets - is to blame for the recent disinterest in pro wrestling. Ruining something we've all been passionate about with monikers like Sports Entertainment and overall, a product that feels ungrateful at lengths.

Punk is the shining symbol of an anti-WWE movement that has grown by disinterest, resentment, choice, disappointment, annoyance, disbelief, or choice. And now, he is back in on the hottest entity in pro wrestling since, well...probably him. Punk's disappearance from the scene mirrors the timeline for these feelings too perfectly, furthering his identity in the role.

In his return, Punk nailed it. From the opening riffs of "Cult of Personality", the random dive into the crowd, all the way to the raw emotion blazing through his wide-opened eyes as he took it all in. All of it was perfect. His promo to come (of course!) while feeding his status as head of the anti-WWE culture, was the icing on the cake. Especially this perfect line that encompasses it all without being (too) direct:

The WWE who often likes to leave others out of its "universe" by virtue of the un-recognition of outside accomplishments, here was Punk, the anti-WWE symbol saying to pro wrestling fans, he's not including them. Cue the excitement for those who have been frustrated by the WWE.

Will this fire burn into something even bigger? Better? Broader?

I'm not sure. But for now, I'll take it in. It was just so damn cool to see CM Punk on my television on a live microphone talking into the rafters to an amazing young talent like Darby Allin, who had the legend Sting by his side.

Plus, there is the wait for Brian Danielson (or will it still be Daniel Bryan?). And who knows who else is coming down the line. Or really, what Tony Khan and AEW have planned.

The bottom line? Tony Khan and AEW nailed it. With a return that further drives a company that feels like they have seven rockets strapped to them that much further, while also grabbing the one talent remaining on the free-agent shelf that IS industry-shaking, it's a win.

And honing in, his debut allowed the moment to breathe and "settle some scores" while establishing his next big moment on AEW television. Another win.

And oh yeah, he delivered ice-cream bars for everyone - super awesome touch. Win.

Kudos to Punk, Tony Khan, AEW, and of course, all of us for getting THAT feeling again.