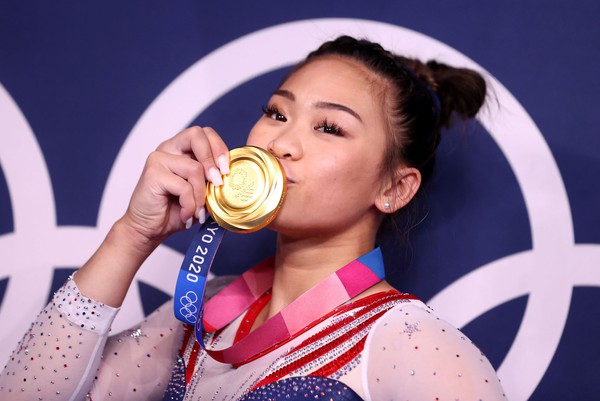 1. The Olympics - Despite the shotty coverage of events (is it me, or has the coverage been awful?), the Olympics have provided some amazing stories, moments, and achievements to relish. From Katie Ledecky's dominance, the emergence of Suni Lee, the NEW fastest man on earth in Marcell Jacobs, the outstanding Jamaican runners, and so much more - it's been a wild ride already.

2. Kyrie Irving - Do some consider him weird? Yes. Do I understand that many are lukewarm on his antics, or just overall vibe? Of course. Polarizing, maybe? Sure. Regardless of where you land on Kyrie Irving, the guy does back up his beliefs not for the approval of you and me, but for what he believes is right. I respect that. That's real. We saw this as he brought clean water to a Pakistani village, as well as infrastructure for solar-powered energy and other modes for help. That's pretty awesome.

3. John Cena - The dude has an intense schedule from his commitments in wrestling and Hollywood. Often forgotten is his charitable work as Cena is the record holder for most Make-A-Wish grants ever. One of Cena's visits went viral this week which would melt your heart, and thus, you had to acknowledge one of the best stat lines in all of sports and entertainment - 650+ grants.

John Cena has granted over 650 wishes to children battling life-threatening illnesses through the make-a-wish foundation since 2004.

That's almost one per week for 16+ straight years.

Here's his interaction with a fan after SmackDown last night...Incredible 🙏

1. COVID Delta Variant - And. Here. We. Go. Again. The Delta Variant is running rampant and now has our regressing in our fight out of this pandemic. It's concerning, and well, frustrating.

2. January 6th Hearing - The stories that were shared this week from police officers involved in the January 6th storming of the Capitol were heartbreaking, wrenching, and head-scratching. The stories simply went deeper into the horrific events that took place on January 6th. If only we can put politics aside and get to the bottom of this.

3. Simone Biles Reaction - I touched on this a bit in a post, and I honestly still don't understand why some feel as strongly as they do about her decision. But regardless, it's unfortunate. Biles deserves better. We need to be better.

Gold medalist Sunisa Lee of the United States kisses her medal won in the women's gymnastics individual all-around at Ariake Gymnastics Centre during the Tokyo 2020 Olympic Games on July 29, 2021