Thoughts on MLB at Field of Dreams Game 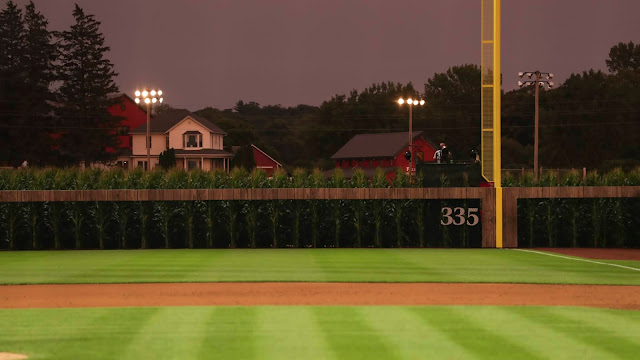 "You'll REALLY like the film. It's a great baseball movie that touches on the father-son relationship - just...just a really good film."

Those were the encouraging words of my father-in-law in regards to the film, Field of Dreams, on the weekend prior to the MLB at Field of Dreams game in Iowa. There were among the few recommendations or positive reviews that I received as the fever pitch (no pun intended - and a terrible movie about the RedSox and Baseball - blah) built toward the game. I, a baseball fan, never saw the movie, or really, had little interest in it.

I finally watched it based on the nudges, excitable remarks, and surprisingly shocked reactions when I mentioned that I never saw the film. And of course, because it would be nice to have SOME context to why the game was special. For me, the film was. well,  it was just there. Good movie - great script for sure. I guess I just never got caught in the romanticizing of baseball that the film elicits for me. And that's coming from a person that shared baseball memories with my father who no longer walks this earth.

Crazy take? Maybe. But the film just never connected with me. Even crazier? A film like Mr. 3000 and its take on baseball - memories, and sounds of playing in the inner city with ice cream truck music and others - is a film that brings me back to my love for baseball more than Field of Dreams did. Just saying...

For me, that was closer to my love for baseball. I also found the focus on "Shoeless" Joe Jackson to be odd. But yeah, different folks...

But again, it's still a good movie and I do (and did even before watching the film) see the appeal for placing a game in Dyersville, Iowa. That is not lost on me. And ironically, the MLB at Field of Dreams game connected with me more so than the movie.

Yeah, I can't explain it, either.

Here are some really quick thoughts on what was an outstanding night for Major League Baseball: 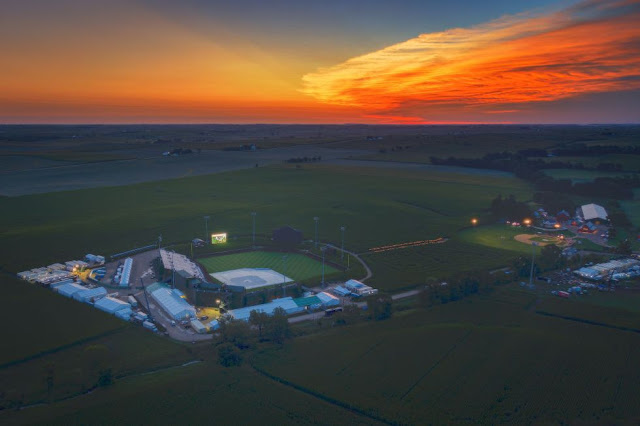 - It's the sport administrator in me, but sooooooooooo many props to the hundreds of people behind the scenes who worked tirelessly to pull off this one-night event. From the field's beauty and authenticity to the marketing and imagery to the production crew, and the producers who had just the right camera shots and sounds to make this game feel as special as it ought to be - all of it - executed perfectly.

The aerial shots were not only impressive and so engaging from a cinematography perspective - but they really expressed how isolated this venue was. You better gas up and pack some emergency batteries if you're heading out to Dyersville.

Regardless, as the saying goes in the sports admin industry - players, coaches, and fans never know the amount of work that goes into making a few hours a worthy experience.

Again, so, so, so much props to MLB's team that was behind this.

- Speaking of, isn't it amazing what is possible for baseball when they work WITH the players on opportunities to grow the game.

The Field of Dreams game was the most-watched baseball game in sixteen years. That's incredible! 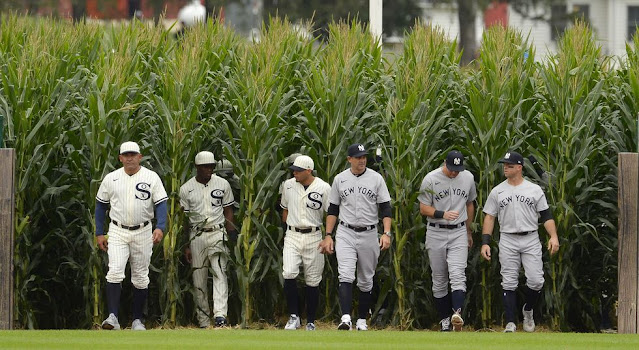 - The entrance of the teams from the cornfields was one of the coolest things baseball has done in forever - at least in my lifetime. Again, baseball typically doesn't do "spectacle", but they nailed every part of the night. Entertainment!!! Ah-Ha!!!

For a sport rooted in the doldrums of attempting to be "pure" and "simple" and shying away from the black magic spewed by industry changers like Bill Veck, MLB surprised us all.

Again, can't say enough about how well this aspect was done.

- Aren't you happy for Iowans? After all, MLB's ridiculousness that is their blackout policies hurts the state more so than any other region when it comes to availability to MLB games. They deserved this.

- One last thing on the setup - it's the details in the outfield wall looking like a wooden fence, but really being a padded barrier, that did it for me. So many details. Again, I'm a nerd for this stuff. 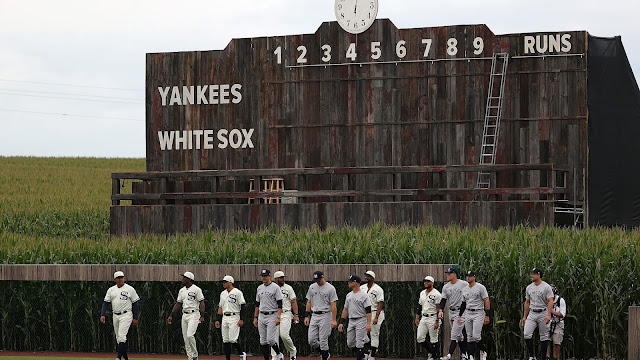 And the scoreboard. Damn, that scoreboard was cool!

- The hard camera was also interesting. Providing a very zoomed-in picture from directly behind the pitcher (typically we get an angled approach), added to the uniqueness and intimacy of the game.

- Of course, the game and product itself were awesome. Baseball could not have asked for a better game, and despite the agony of my Yankees fandom, a better finish.

That ninth inning was exactly the kind of drama baseball needed with casuals watching. 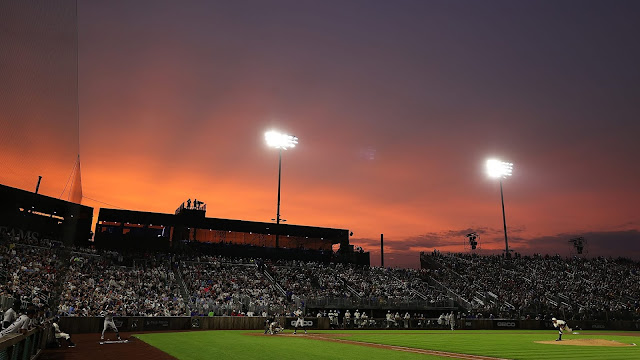 - So was the sunset. The underrated player of the game. That Iowa sunset overlay on the field. Wow.

- Many may not like him, but whenever Joe Buck's voice is heard - on anything! - it feels big. The guy is just the very best at what he does.

Kevin Costner in the booth was tremendous. Too often you get celebrities in the booth who are "baseball fans" who make it about their fandom. Costner felt like an ambassador for the movie and the game of baseball - a rare line to walk and pull of considering the role for the night. 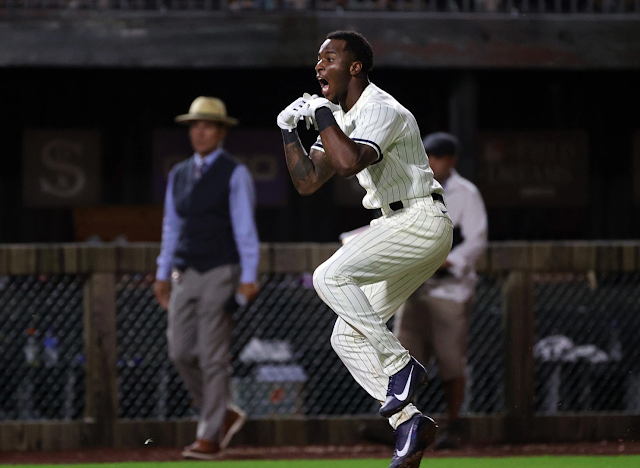 - Twitter was a buzz with hopes for baseball to re-create the Sandlot site. It's not a bad idea - but if you can't recreate Hercules in the left-center field, I'm not sure what's the point. Hercules was the essence of that field. Sort of joking. But kind of not.

With that said, I am happy that the league has committed to the event again next year. My only hope is that they protect it and keep the game special. Once-a-year - that's it. Let's not get crazy like the NHL by making multiple Winter Classic games. Keep. It. Special.

The Sandlot idea is a good one, but I feel like there is a slippery slope on recreating fields from baseball movies that easily can jump the shark when it comes to keeping these events special, interesting, and in many ways, a tradition in itself.

I would like to see maybe the league play a game at the Negro Leagues Hall of Fame in Kansas City. I wouldn't be surprised if we see future international games return on the calendar like we saw a few years ago in London with the London Series (they are still contractually tied for one more game there), or even further with games in Mexico, Japan, and such.

But even then, those still don't feel as special. There's just something unique about bringing fictional imagery to real life, especially one that carries such significance with so many people.

Baseball in a cornfield. It's still so cool even for this Brooklyn kid, who struggles to reach the movie on the deeper levels of why so many others love it.

Again, it can't be said enough - thank you, MLB. Especially those who worked on this event.