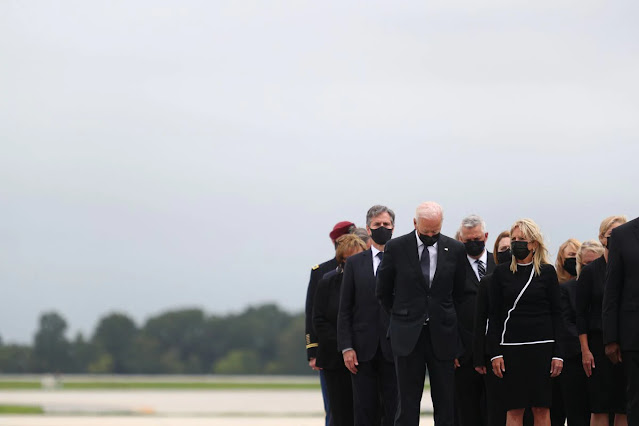 1. 13 United States Soldiers - Nothing dominated the news world this week like the terrorist attack that killed 13 US soldiers in Afghanistan among many others. The humanization pieces of those amazing soldiers have been tough to endure, but also, have been a great reminder source of the sacrifice that is exhibited daily - even if we aren't a perfect union. THAT deserves the top spot this week. All of those soldiers deserve the top spot. My prayers tonight will go to the loved ones of each of those thirteen soldiers, and the many others killed or injured from this attack.

2. Air BnB for Afghan Refugees - More Afghanistan fall out that has become good - Air BNB has pledged to provide housing for 20,000 Afghanistan refugees. That's pretty cool, and really, a simple reminder of how far simple humanity from corporate America can go. If they want to...

3. Little League World Series - In a purer form of "Up" this week, we're shouting out all of the kids from the Little League World Series. And of course, all of those amazing coaches inspiring these kids. We missed the international pool, but it was just nice to have a normal event that is fun and amazing - everything that is the LLWS - back again.

1. Kabul Terrorist Attack - Obvious. Just heartbreaking and utterly concerning what is happening over in Afghanistan.

1b. Kids Killed in US Drone Strike - The retaliation wasn't innocent as well. Just more heartbreak. The world is complicated. But one thing is for sure - it's all so sad. None of it feels just.

2. Hurricane Ida - "Extreme Weather" in some form has been dominating the "down" area over the last few weeks. Well, here we go again as the Gulf Coast - specifically, New Orleans - are set to be pummeled by a category 4 hurricane.

3. New York Mets - In one of the most bizarre things I've ever heard in sports, the New York Mets - specifically Javy Baez and Francisco Lindor, admitted to giving fans - yes, fans?! - the thumbs down whenever they perform well. This is in retaliation for how the Mets fanbase treated them. Uhhhhh what?!! Just a bad look. No, check that...just stupid.

In sports, you go after the fans - the paying consumer - you lose. Simple.

1. Milkcrate Challenge - I want to call the milkcrate challenge a stupid and ridiculous online fad that does nothing but get people hurt, but the other part of me watches all of them in anticipation, and well, if it gets people moving after a pandemic - shoulder shrug.

2. Florida Judges' Mask Mandate Ruling - So Governor DeSantis's block of mask mandates was considered unconstitutional. Within a few days of school beginning, and with this now as precedent, and in a time period where school board meetings have become shouting matches of regurgitated rhetoric from your selected cable news channels, all of this is about to get interesting.

To be honest - just blogging - I don't see the big deal about wearing a mask.

U.S. President Joe Biden and first lady Jill Biden attend the dignified transfer of the remains of U.S. Military service members who were killed by a suicide bombing at the Hamid Karzai International Airport, at Dover Air Force Base in Dover, Delaware.