Simone Biles Withdrawal: It's On Us 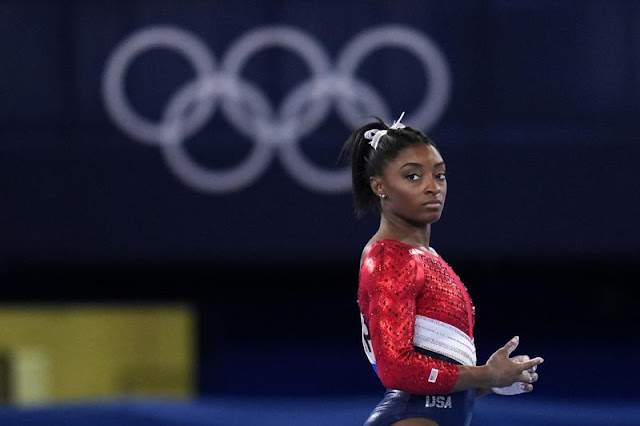 I sat on this topic for a few days because I could not understand what was beneath the surface of the hysteria that is Simone Biles and her recent withdrawals from events at the Tokyo Olympics.

Here we are on one of the biggest stages in sports - the biggest for niche-interest sports like Gymnastics - and suddenly the greatest gymnast in the world, our own fully spirited American, being torn down, ridiculed, debated, and on the backend of undeserving backlash.

There were the low-hanging fruit remarks - I go to work every day. I can't just quit because I want to!! You just have to love the remarks from those who easily want to compare themselves to Simone Biles but are unable to understand her experience. We all have hardships. But imagine naivete to compare yourself to an Olympic Gold medalist?

Of course, there was the sheer cynicism from a place of no credibility - What a quitter?!! This generation has raised a bunch of wussies!!! There really is no way to reasonably return dialogue with this mindset.

And there were the projective narratives onto the situation - She's making it all about her! If she had problems, why didn't she just stay home and let someone take her spot?!

You get the point. And you already know the environment.

Truth be told, I wonder where this energy was when Simone Biles and others had to go through the taking down of the USA Gymnastics culture that was rampant with sexual abuse. But whatevs...

I also wonder if all of this is rooted in the backlash of mental health discussions and the stigmas that are still present and misunderstood around the topic. Especially so in sports. This is a country that holds the sport of football as religion. A sport that has made the idea of mental health a massive gorilla we'll continue to find a bigger and bigger closet to tuck it away in as to not have it ruin the sanctity that is the gridiron.

There is also the obvious irony of the constant backlash of her, as she felt "the weight of the world on her shoulders, as she communicated on her Instagram.

Regardless of all of the thoughts and reactions, I keep coming back to two distinct thoughts on it all. No matter how much I attempt to dissect and digest it all. 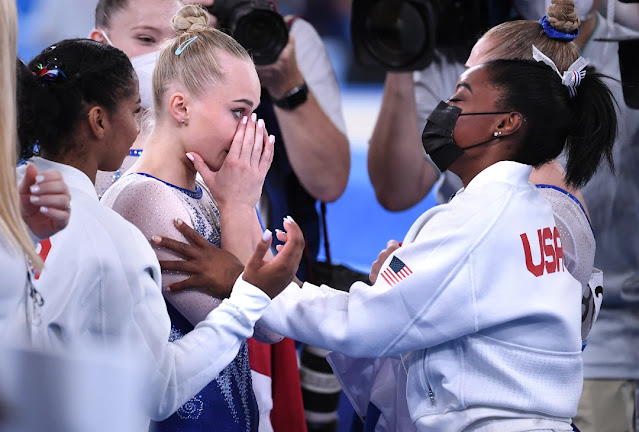 WHY DO PEOPLE CARE?!

Seriously. Why do those who "oppose" the decision of Simone Biles care so much?! Is it because they are upset they won't be able to see her perform? Do they believe that she has disgraced the United States in some form? Do they believe Biles owes them, the country, or the sport of gymnastics more?

Of all of the criticism mentioned above and the many more discussed, written about, and ranted about, it just feels like a situation that is polarizing for the sake of being that - polarizing.

I can't connect it all here as I just don't understand the "Why" in the public reaction. Why are we upset that an athlete decided to step down if she feels she's not right to compete?

Yes, sports are rife with moments of courage and adversity. It's one of the reasons we love it. They are also filled with moments of opportunity and triumph, another reason we love it. While Simone Biles struggles, the country - the world! - was introduced to Suni Lee this week.

OUR CURRENT OBSESSION WITH DISMISSING GREATNESS

I don’t know if I could’ve survived in this Twitter [era], where you don’t have the privacy that you’d want and what seems to be very innocent can always be misinterpreted.

This is prevalent throughout our culture - the abundance of "takes", debates, "what ifs", "buts" and over-analyzing of athletes and performances. We've become so eager to rip down athletes of today - especially based upon their political, business, or cultural position - that we often miss and underappreciate the greatness of their talent. We won't admit it, but we want our athletes to either be representative of everything that we are, as well as hope we would be if in that situation. If not, their entire career is subjugated to public opinion. We've seen this so many times throughout history.

The growing awareness (and opportunely) intersectionality of sports, politics, business, and culture, as well as the instantaneous need to react, share, and position (or "up your clout"), is one that has become a societal cross-path creating supreme dissonance of appreciation for us.

The rare combination of ability and mental focus - the salient attraction we once marveled at - now comes with open opinions, likes, and various opportunities for "discussion" in our overall assessment and appreciation. In the case of Simone Biles, the greatest gymnast of all time, her decision is not one of controversy, ill-decision, or selfishness, but that of our inability to appreciate the modern athlete. Their mental toughness and ability in the current wave of celebrity is still vastly underrated, as well as their autonomy to place rise above and provide self-care over the ever-changing environment - no matter how toxic or transparent.

Michael Jordan, arguably the greatest basketball player ever, and an example of the"mental toughness" used as a barometer for excellence by opposers (also because of his neutrality through all of these colliding intersections at the time of his playing career), recently admitted to the difficulty of the current environment.

We forget, even Jordan, at the height of his career, stepped away from the game of basketball in 1993, citing "burnout".

Simone Biles taking time to get herself right is fine. In sports, if the mind and body aren't connected, it's just not going to work. I not only commend her for being aware of this and stepping away (which takes immeasurable emotional IQ and humility) but also, doing so on this stage - the Olympics. The premier stage for her spot. THAT can't be easy.

And there is also the empathy factor. I can't imagine that withdrawing solves the problem, but merely the best of the options at this time - again, for her.

The more and more I think about the situation of Simone Biles withdrawing on this stage, the more that I realize the reaction has less and less do with her "quitting"; being "selfish: representing the everyday working person; "wokeism": a product of "Generation Z"; upholding national pride; or anything else...

This entire situation and all of the rage and reaction are reflective of us.

Some treatment for an American treasure, and the greatest gymnasts of all time.

8/3 POST EDIT: Simone Biles participated in the beams and medaled for a Bronze in the event.

Not bad for someone whom we questioned their mental toughness.