Dome Pondering Movie Review: The Kids Are All Right (2010) 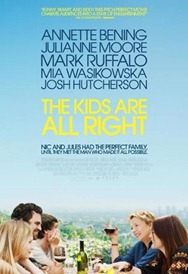 A family headed by same-gender parents is turned upside down after the children seek out both of their mother’s sperm donor – their biological father.

The scene where the mothers meet Paul for the first time over lunch.

The Kids Are All Right is an interesting film that sheds light on a situation that is very peculiar, but exists. As the modern family definition continues to vary, this one lets us in on a family of two mothers who have raised two children through artificial insemination from a sperm donor. The film is very real in the problems the characters face, and the depth of their emotions in dealing with the unorthodox situation. However, it also helps share the story of struggling marriages, as well as the fact that marriages need constant work. Not to mention, the main message (as given away in the title) that same-sex marriages can raise children with the same love and headaches as always.

Despite it’s strong (and somewhat subtle) political message, the film is a good one that is enhanced by it’s actors. Julianne Moore (Jules) and Annette Bening (Nic) are terrific in their roles as two mothers trying to “figure it out” through this new addition to their lives. Their talents shine through as they help define the situation, and add to the overall plot of the film. Mia Wasikowska (Joni) and Josh Hutcherson (Laser) are just as good.

Overall, The Kids Are All Right is an interesting movie that is definitely not a waste of time. The acting is the best part of this movie, and the film reflects that. The only criticism is that the film at times seems a bit more raunchy than it’s R rating. Not a film you let the R rating slip by for the young ones.