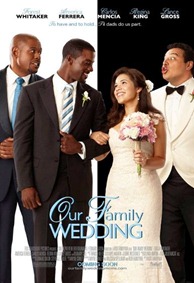 Two individuals who are set to wed while dealing with the clashing of their very different families and their feuding fathers.

After agreeing to check out DJs for the wedding, Miguel joins Brad on the club scene for a night. After a few drinks, they both end up at the police station.

“Our Marriage. Their Wedding.”
“The Secret to raising kids: Lie to them!”

Our Family Wedding is a film that I had pretty low expectations for due to other reviews on various websites. However, as is the case with some reviws, and the reason for this section at the DP, this film was contrary to it’s reviews. In fact, this film was really good. Our Family Wedding has a very similar feeling to the classic, Guess Who’s Coming To Dinner, but with a modern twist, and oh yeah, much, much, much more funnier.

Forest Whitaker (Brad Boyd) and Carlos Mencia (Miguel Jimenez) were great in their roles, and at times very surprising as the dueling fathers. Whitaker who is great in his serious roles showed a different side in his talent, and Mencia seemed a little less dialed up than his usual routine, but still came across very funny.

All in all, a film with a plot that has been done a few times, however, Our Family Wedding nailed it on capturing all of the etcetera that occurs when two crazy and different families come together as one. A decent film that is fun and entertaining, and a must-watch for engaged couples and newlyweds.