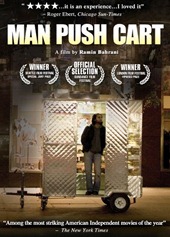 The experience and struggles of a former Pakistani rock star that is now selling coffee and donuts out of his push cart in Manhattan in an attempt to escape his current lifestyle.

After Ahmad helps out another cart worker with his van, as well as setting up his cart for the day, the older man tells Ahmad to cover for him until he returns from getting his van. The man never returns.

“Me and friends used to listen to your CD all of the time…what the hell are you doing peeling tape off my windows, man?”

Man Push Cart is a decent indie film that is great for the true New Yorker. The film lets you into the life of a push cart vendor who had it all in his native land, but is attempting to escape his current life, and maybe his fate, as a push cart vendor in New York City. The details of the film creates an authentic feeling, and gives the viewer a true introduction into the life of a immigrant attempting to gather his life after leaving his native land.

Man Push Cart’s lack of dialogue and slow pace actually (which may not be for everyone) places emphasis on the words said by “Ahmad”, which deepens the character and the connection the viewer has to him. Some of the credit for the viewer connection to the character is due to Ahmad Razvi’s performance.

All in all, Man Push Cart will not wow you with a superb entertainment experience. There is no plot, no cool effects, or rarely any exciting moments. However, the film will offer an experience that forces one to think about the life of others, the small interaction that can change a person’s life, and the life that those that serve you your morning breakfast out of a push cart have.

Once again, at most, a decent watch for all, and a must-see for the true New Yorker.