Jeter Offer Should Be To Save The Future, Not Pay For The Past 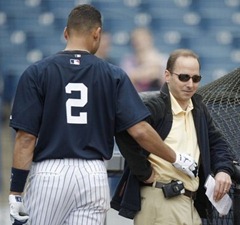 The ongoing negotiations between Derek Jeter and the New York Yankees is just another example of the constant debate of true worth versus public sentiment. We’ve seen it before many times with aging superstars heading into free agency while looking for top dollar from the organizations they are synonymous with. It is a situation that is one of the toughest for an athlete to come to copes with in regards to their declining ability, and more so for organizations who have to protect their future and not disrupt the public relation equilibrium or rock the support of the organization’s fan base.

Yet, it happens, and once again we are witnessing it again.

Two years ago, Michael Kay called Derek Jeter’s impending free agency, “the most difficult decision that will have to be made in the history of New York sports.” And as of today, he is right. As Jeter approaches his 37th birthday, fans (the die hards, and even the fraud-bags) are aware of his declining skills – especially the big gorilla in the room that is the eventual move from shortstop to another position.

As talks are now becoming messy between both sides, the lines in the sand are now drawn. The Yankees, who have offered Jeter a 3 year deal for $45M, well above his market value, have stood firm on their offer. Brian Cashman has followed up the offer by telling Jeter’s camp to “test the market and see if there’s something he would prefer other than this.” Jeter’s agent, Casey Close, called the Yankees stance on negotiations, “baffling”.

It is indeed an interesting situation. And while many believe – myself included – that Jeter will be in a Yankee uniform come the 2011 season, the stipulations and on how it will occur remain the big question mark. While many fans are clamoring for the Yankees to just pony up the cash and years, your truly falls amongst the contingent that  are looking for the right deal – the best deal for the New York Yankees.

“How can you do that to Jeter? He’s done so much for the organization?”

However, the argument of “what he has done blah, blah, blah” is one that makes me shake my head in every argument in support of a declining superstar in free agent negations.

You want to know why?

Jeter has been paid top dollar for the past ten years to play the shortstop position. Yes, he did produce Hall of Fame numbers during that time, and he was compensated as such. These current negotiations have nothing to do with those past ten years. Jeter is no longer the same player he was, and will never be that player again. Why compensate him as such?

Another supporting argument behind the “Pay Jeter” movement is his invaluable leadership. Yes, Jeter is a rare commodity as a great leader, and one of the few captains in the history of the franchise. However, it is fair to say that $15M for per year for a 37 year old shortstop has more than enough added cushion in salary for his leadership.

Jeter needs the Yankees and Yankee stadium for his 3,000th hit. There is no way he get’s that milestone hit next year in another uniform. None. No chance.

As much as Yankee fans want to clamor about WWGD (What Would George Do?), the fact of the matter is this ownership has the same mentality in winning, however, with restraint. And as much as people scoff at the idea, there is indeed a budget.

However, the biggest issue for the stance on a fair deal for Jeter (Even though 3 Years at $45M is more than fair) is one that many true fans are currently worried about – the state of the Yankees moving forward. With many players locked into long-term deals, much of the Yankee core will age, and unfortunately, begin to decline at the same time while doing so making top salaries. Such players will include Mark Teixeira, C.C. Sabathia, A.J. Burnett, and Alex Rodriguez (more on him in a bit). If Derek Jeter does re-sign and hypothetically (and potentially) there is a signing of Cliff Lee, the Yankees could be very old at various positions in the year 2012 and/or 2013.

Once again to reiterate the face, that is a bit more than a hundred million dollars tied into declining and aging players.

It indeed is a serious concern. Look no further than the Boston Celtics in the 80’s after they re-signed McHale, Parish, and Bird well after their prime years, and the damage it did to the franchise.

And if you believe that’s thinking too far ahead, how about the upcoming free agency of Robinson Cano and Phil Hughes (arbitration)?

Money does not grow on trees, not even if you are the New York Yankees.

With Brian Cashman having full autonomy on baseball decisions, and Hal Steinbrenner running a tight book, becoming more efficient financially will be a staple moving forward. The organization now knows how big of a mistake the Alex Rodriguez deal (10 year, $275M)was and they will feel the repercussions eventually from it.

As Michael Kay stepped out several years ago with a potential Jeter free agency, I will as well saying, the A-Rod deal will haunt the Yankees for the next several years.

Could Jeter’s ego be hung up on Rodriguez’s current deal? Rodriguez after all has a deal that takes him through the age of 42, while he, the captain and his legacy as  a yankee, is being offered “just a three-year deal”. Hey, just blogging.

Nonetheless, as the Jeter negotiations continue, both sides are obviously going to seek what is best for them. As for us fans, before you go clamoring on raw emotion and memories of the past begging the Yankees to give Jeter what he wants, think about what this negotiation is truly about – saving the future.