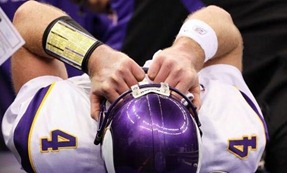 On a day when Brett Favre’s 292 consecutive game streak is in serious jeopardy, I find myself amazed at the drastic turn that Favre’s career has taken since leaving Green Bay. Favre’s career almost seems like two different eras, the way Barry Bonds does and the way MJ’s does. Each different and segmented for various reasons, but different, nonetheless. With Favre, there is the Green Bay era where he was known as the guy that made football seem like oh-so-much fun. The kind of football that reminded you of backyard football, and that maybe Favre was just like you. The second era which saw the multiple comebacks, the constant 24-hour surveillance, and the severe need for attention is the current era we are now in. The era where we are made to believe by ESPN, the NFL, and other football on-the-payroll insiders, that Favre is “just like you”.

The evidence in the two eras are evident in the three different posts that yours truly has written about Favre. One written upon his initial retirement (No Longer The Favre-orite: Replacing America’s Hero), another just several months later on his comeback (All Favre’d Up: The Drama Surrounding The Legend), and finally one written this past August (Hard To Say Goodbye). Not to mention earning the 2009 “Just Go Away” DP Year in Review Award.

Nonetheless, we are here at this point. And while the fact that Favre’s actions over the last few years has made it hard to say goodbye to such a great performer, Favre is now disfiguring his character thus much more in a season that has been anything but another Cinderella story. In fact, let’s been honest, this story is turning out to be more of a Greek mythology tragedy.

With a fractured ankle, a battered body, and his consecutive streak on the line, Favre is now at the point where the game is forcing him out. I have always been a believer in pride and arrogance before the fall, and I am sure that this is it.

However, the biggest issue regarding Favre is the saga regarding Jen Sterger, the Jet’s cheerleader whom he left voicemails and sent text messages to. It is quite unbelievable that Favre has yet to be investigated (for real) by the NFL. It took nearly two weeks for the NFL to investigate and conclude on matters regarding the New York Jets and female reporter, Ines Sainz. Where is the urgency?

How about if this were someone such as Terrell Owens or Chad John…err Ochocinco, would this be as laissez-faire?

Roger Goodell would be levying fines and suspensions as quick as Chris Johnson hits the line of scrimmage.

Sterger-gate is proof that New Era Favre has lost it and is out of control. This is the catalyst towards the end of Bret Favre.

I know what you are probably saying, why all the hate for Favre? And by the way, I never quite understand why people rationalize a person’s shortcomings with the “stop-hating” argument ala current LeBron James crusaders. But I'll digress. 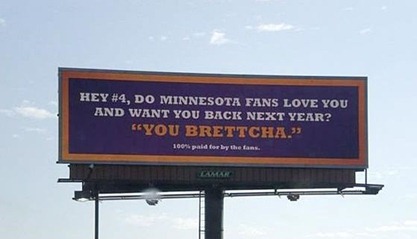 Green Bay Favre is done. This Favre is a man that has sold his soul for a few more years of being in the spotlight of the NFL. This Favre enjoyed the constant ESPN coverage, the helicopter surveillance, the bottom-line section in the month of May, and the need from fans and “experts” who label him as the (fill in the blank with any team) savior.

This new era of Bret Favre has given us a man who is hungry for greed, attention, lust, and fame. All components for a recipe for destruction.

He got it all, and now, the end is near for both Old and New Brett Favre.