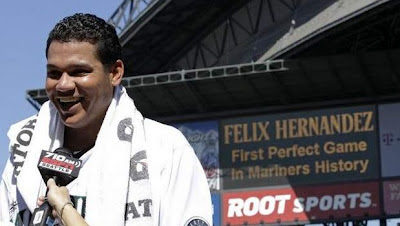 On Wednesday, August 15th, 2012, "King" Felix Hernandez of the Seattle Mariners became the 23rd pitcher to throw a perfect game. In what has become a rare third perfect game accomplished in this 2012 season, Hernandez finally managed to receive the spotlight as one of the game's best pitchers, a recognition he is often left out of as part of the woeful Seattle Mariners.

In a rare feat, the Mariners become the first team to ever throw a perfect game, and to have one thrown against them. And even more rare, its the first time two perfect games have been throw in the same ball park (Safeco Field). While I still find it hard to top Matt Cain's perfecto which included 14K's, The King's reign was just as dominant with twelve strikeouts and an amazing 68.1% of his pitches for strikes. Simply, amazing.

As usual, the following video import was captured by a lucky fan who happened to pick the perfect day to attend a ballgame: