Dome Pondering Movie Review: How To Train Your Dragon (2010) 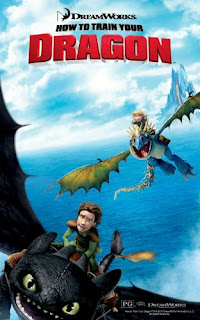 The hopeless son of a viking Chief in a land of dragon-fighting vikings befriends a dragon and learns there is more to the creatures than  he, or his community assumed.

As he learned more about "Toothless" and about dragons, he began using them in his dragon combat training back at the viking village. Much to the surprise of everyone, Hiccup went from the laughable viking, to the surprise trainee.

[Repeated line]
Hiccup: Thank you, for summing that up!

It is amazing how much Dreamworks tends to get right with their animated films that other production companies can't with actual actors. The plots, scripts, and progression of their movies are well told, comedic,  interesting, and are always well-produced. Simply quality all-around. And How To Train Your Dragon is no different.

The film has an awesome progression of story which really lends to the overall product. From the explanation  of the Viking town, the introduction of the role of dragons in the community, and the overall relationships and personalities of the characters, the film brings you into the story in an easy and entertaining way.

Add to it the great screenwriting for each of the characters and the solid voice work, How To Train a Dragon really is high-quality film.

A must-watch for Dreamwork fans, and high recommendation for movie-lovers.