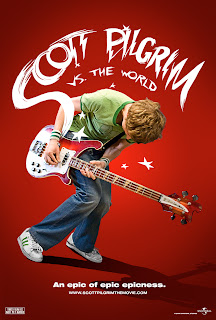 Scott Pilgrim must defeat his new girlfriend's seven evil exes in order to win her over.

After learning about the seven evil exes that will be coming for him, Scott battles one of the weirdest ones in the form of a vegan with special powers and strength.

Scott Pilgrim vs. The World is such an interesting and unique movie. It's definitely not a film for everyone, but if you have an appreciation for video games, arcades, and a easy sense of humor, you will find this film to be very good. If you are missing the aforementioned, this film may seem alright, but really liking it will be a bit of a stretch.

One of the coolest things I took away from the movie is it's presentation as a video game with classic graphics, soundtracks, and of course, the defeated enemy bursting into coins with the overhead score popping up to conclude the battle. The other very cool part of this film is the constant flow of the film from scene to scene without any true downtime. This also can hurt the film with others who like digesting scenes as it fades to black, but Scott Pilgrim vs. The World does this in such a way that keeps you engaged.

Finally, the humor in this movie is subtle, but very funny within the already child-like theme of things with catchy one-liners, and the classic Michael Cera perfected nerd-typecast which he does so well. Scott Pilgrim  the character seems like the adult version of Paulie Bleeker from Juno.

All in all, Scott Pilgrim is a fantastic film that unfortunately will not appeal to some. However, for the niche that is attracted to the concept, it's quite the recommendation.

Give this one a chance, you may love it, if not, atleast you can respect the interesting concept it produced.