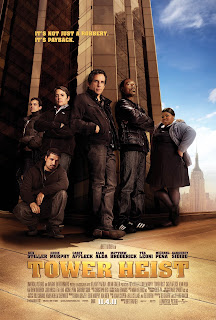 Building employees, who are victims of a wealthy tenant's Ponzi scheme, conspire and work together to rob what is left of the man's fortune to not only put him in jail, but to get revenge.

After Slide is introduced to the crew, he does not think the crew has it in them to pull off the heist. As a challenge, he tells the crew to leave their wallets, and to comeback with at least $50 worth of stolen merchandise. The four men go off into different sections of the mall to pull off their thefts.

"Welcome to the Shake Shack! What's Shaking? We shake all day!"

"He's been arrested a bunch of times. He pays no income taxes. He's got 2 Doberman Pinschers. So let's show him some respect, OK?"

Tower Heist is one of those intriguing movies that has the potential to be funny upon viewing the trailer, but you simply figure it will let you down. The plot seems interesting, and the cast has plenty of potential, but somehow, whether it be recent work, or that feeling, you expect it to bomb.

The film is a solid one that has plenty of replay value. The plot is slowly explained in the first half-hour into the movie where the ground work for the film is effectively and easily laid out. You get a handle for all of the characters and their place in the movie moving forward. As the story unfolds, much of the movie comes together and even offers some suspenseful scenes and twists in the plot that keeps things interesting.

In a weird way, Tower Heist is a funnier, less bad-ass version of The Italian Job.

What really makes Tower Heist a great watch is the obvious - the cast. Stiller is perfect in this role where he isn't forced to be over the top funny in the lead, but still has his opportunities to have his one liners. Eddie Murphy has a few classic scenes which really makes you remember how talented he truly is when placed in the right role. And Matthew Broderick basically steals the spotlight in the movie in his role as the paranoid Mr. Fitzhugh.

Overall, Tower Heist is a film that is a solid comedy. Don't be afraid to watch this one, as it is well worth the investment.