Putting The Blame Where it Belongs in Gang Greenland 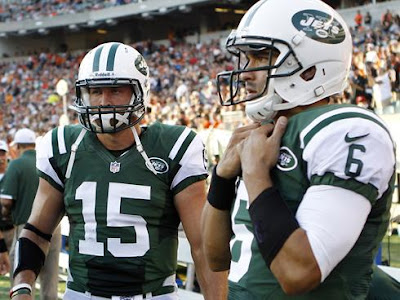 Several days later, I think Mark Sanchez and Tim Tebow are still picking grass out of their facemasks.

And I know for sure, Jets fans and the football world are still groaning about the effort we all saw by the Jets at Metlife Stadium.

There is no need to rehash, repeat, or regurgitate all of the hoopla that has surrounded the New York Jets heading into this 2012 season. We all know the Jets are a mess, and have become every sports outlet's goldmine for debate and analysis. So far, the Jets are the gift that just keeps on giving in that aspect. And while the argument of Tebow versus Sanchez, or Sanchez versus Tebow, is the hot topic, the overall concern in Gang greenland is growing. We are getting to a point where there is serious concern over the team's ability and capabilities come September 9th, when these games begin to count.


I know it's only been two games, and in most cases I've never been the type of sports fan that jumps the gun on these type of scenarios, but Saturday night was awful. A-W-F-U-L. Awful!

And the Jets offense deserves the majority off the responsibility regarding Saturday night's stink.

For a team that has a goal of winning the Super Bowl, we couldn't even win the Snoopy Bowl!

Despite the blame directed toward the obvious Tebow-Sanchez, or, yes, Sanchez-Tebow tandem, which has been the focus, the blame should not go to either one.

Sanchez, whether you believe it or not, is still a growing QB with better numbers than the eventual two-time SuperBowl champion, Eli Manning, had in his first three years in the NFL.

And Tebow, while I'll admit he is one of my favorite athletes, and many may not feel that way because of the overexposure and insane obsession he receives from the media (looking right at you ESPN!), he too is a young QB, in his second year, and with lots of room for improvement.

To squarely place the blame on them for this poor offense is not fair.

So who is to blame?

Ryan, who has taken his lumps for losing control last year, actually has done the work in preparing this team. He has done the best with what he has had to work with.

See where I am going here...

Can we blame Woody Johnson?

Sure, it always starts with the top, but Woody, unlike some owners in the league, allows his football personnel to make the appropriate decisions.

Is it the human toll booth, Wayne Hunter's fault?

As much as he has done, (or really, as little as he has done) to help Sanchez and Tebow, or yes...Tebow and Sanchez,  it is not the fault of Sir Wayne. He is starting because he is the best option at this time. Which is a scary thought!

It can only mean this squarely falls on one person, as he is the focal point of these issues, and should be the first to receive blame if the Jets never get off the ground this season.

General Manager Mike Tennenbaum, this is on you.

I've always appreciated Tannebaum's aggressiveness in going after players and taking chances (Bret Favre and Plaxico Burress), but often, he does so in the face of reasoning and chemistry (See again: Favre and Buress). After going to two straight AFC Championship games, a phrase which all of us Jets fans and even the Jets themselves should just stop using for no reason other than to stop sounding like complete losers, Tannebaum has either wrecked this team's chemistry by removing key players (Jerricho Cotchery, Tony Richardson, Alan Faneca),  by going after big names for the heck of it (see: Burress, Tomlinson, and Favre), simply contradicting his other moves (see: Tebow), or pretty much finding every possible way to sabotage the growth and development of a franchise quarterback he gave up half a draft for.

And even if you believe Tannenbaum deserves credit for building two teams that - yes! - went to two AFC Championship games, I ask you Jet fan, I ask even you NFL enthusiast - at what position did the Jets offesne improve upon from last year?

If you said backup QB, then I'll laugh along with the witty answer. But then I'll quickly regress into depression because the answer is none.

All of the offensive needs the Jets had were not met in the off-season. Not one.

Saturday night was bad. Actually, quite terrible. Lucky for us Jets fans, it didn't count, and there is still time to get this right.

However, if things continue in the already negative outlook and bad feeling Jets fans have going into the 2012 season, don't blame Sanchez.

Let's put the focus and blame where it belongs, to the architect of this mess - Mike Tannenbaum.