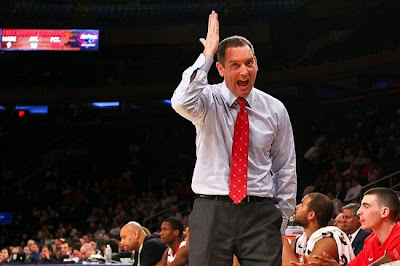 It's hard to imagine that the videos we've seen of former Rutgers men's basketball coach, Mike Price, were legit. Actual real footage that happened in real life. No scripts. Not for television. This was a real human physcially abusing and berating impressionable young men in the worst of ways.

What is harder to imagine is that Rutgers officials, mainly athletic director Tim Pernetti and the institution's president, Robert Barchi, who reviewed those same tapes, found justice in issuing a three game suspension along with a $50,000 fine to the irresponsible coach.

And of course, all of this should not go without recognizing Erik Murdoch, the whistle-blower in this entire situation who attempted to cash in by blackmailing Rutgers for a cool million not to release the tapes to ESPN.

We all know the only reason Mike Rice is no longer the head coach of Rutgers men's basketball is because this issue went public, and their hand was eventually forced. We also know that he is not truly sorry for his actions, only apologetic that he was caught. However, the idea that the welfare of students are still in danger at universities, especially when they are cared for in the hands of those who do not have their best interest, is very alarming.

I'm not quite sure how Mike Rice thought abusing, embarrassing, and yelling homophobic slurs at his players would motivate them.

I'm not quite sure how an athletic director and president can keep a coach employed after viewing those damning tapes.

And I can't believe we still have personnel who are afraid to report wrong doings on college campuses and in college athletics...well, unless they can profit from it. Of course.

However, it's stories like this that make it hard for the NCAA to defend itself when it comes to the DI athletic culture. It's become a culture so perverse in going beyond the measure of ethics to win, that it conflicts with it's continuing failing front of the "student-athlete".

It's a world where coaches run a mock like the wild-west breaking contracts, offering lies to recruits, and ultimately failing to do what parents entrust them to do - developing their kids during a critical time in their lives.

It's world unlike the pro game where the athletes are the stars, coaches are the attractions in the college game. They run from team to team like bandits chasing the next top dollar without any remorse or loyalty, and are starkly defended in the town/region of their employment from the  faithful fans of the school they now represent.

After all, let's be honest, this situation would be a lot different if Mike Rice were a two-time national champion. Or if this were to happen to someone such as Coach Mike Kryzyzewski, Coach John Calipari, or even Coach Rick Pitino.

Nonetheless, ask yourself, what would have happened if one of those kids being coached by Mike Rice reached his breaking point and decided to retaliate? You know, simply had enough and just decked Rice during practice. That kid would lose his scholarship, his education, and his future. He'd probably - and eventually - be blacklisted as "uncoachable" and many doors of opportunity would be slammed shut on him. And of course, nothing would have happened to Mike Rice or the reputation of Rutgers University.

He's to shut up, take the abuse, and do as told.

I hate to say it, but that sounds a whole heckuva lot like a racehorse. And sadly, it seems that's what the NCAA culture has become in DI basketball and football.

I always wondered this - what if entry into the March Madness tourney or even the BCS rankings were determined on a combination of record AND the current graduation percentage of your team, how different would the tournament/rankings be? How much would that effectively change the entire landscape of DI college athletics?

I guess coaches would have to recruit players with high characteristics, invest themselves into those players, develop them as athletes and people, graduate them, all while coaching them into the best players they can be.