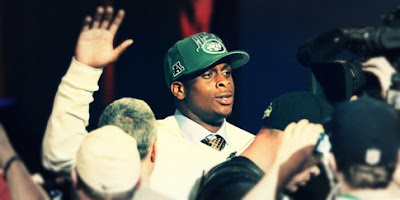 The Jets may not always make the right personnel or sound football decision, but you have to admit, they definitely know how to grab your attention. With the selection of West Virgnia's Geno Smith with the 39th pick in the second round, the Jets stole the show at the 2013 NFL Draft.

However, unlike project Tebow, which oddly is still in progress, the Geno Smith selection isn't as controversial, and in some ways, can be said is a quality pick. The Jets were high on Smith, considered even drafting him with either their ninth or thirteenth overall selections, and still managed to get the young quarterback in the fold with their second round selection. Bravo! Seriously, no sarcasm there. A non-dumb decision by your franchise can indeed feel good.


As for the warning signs, apparently the Jets have scouted Smith for awhile, including sending several representatives to see if Smith was the real deal. According to reports, they were blown away. Now of course, we heard the same thing several years ago regarding a certain "can't miss prospect" out of USC. We all know how that has gone.

What I can say is this, adding another quarterback can't hurt at this junction. As of today, the Jets have six quarterbacks on the roster. Enough to build a starting rotation if needed. Nonetheless, enough talent for a good competition to end up with one decent 2013 quarterback, or at the very least, enough mentors and an wasted season to start the development of a young quarterback for 2014.

The silver lining in this entire story is that Jets GM, John Izdik, was among those in the Seattle Seahawks organization that pushed the effort to draft Russell Wilson against the advice of many.

I'm not well versed on Smith, but that's a track record that does offer hope of some sort as well as football competence. And unlike many sports "analyst", "experts" and talking heads who base all of their so-called knowledge upon projected picks and mock drafts from those who do indeed have a clue and sound off when a player is picked before or after those projections, I can admit I am not familiar with Smith. Heck, I couldn't tell you anything about any of the players the Jets selected other than what is said about them by mock drafts and NFL scouts.

Here is what I do know after some research: he threw for a 71.1 completion percent for an average of 8.1 yards per attempt that resulted in an awesome 42-to-6 touchdown to interception ratio. Videogame-like numbers.

I know college players, especially quarterbacks, rarely transfer such success into the NFL, however, when drafting and placing hope for the future, those numbers sound pretty damn awesome. I'll make that pick, and take that chance as well.

I don't know what the future holds for Geno Smith or even where he lands on the latest scale of grading Jets quarterbacks - Namath to Sanchez.

Yet, what I do know is that the quarterback position is beginning to look less and less like it will be Mark Sanchez's come Fall (let's just give up on Tebow having a shot). I touched base on this once Greg McElroy replaced both this past year (Sanchez Era Over With Debut of the Mac?). It didn't even matter what McElroy ended up becoming as a pro. Sanchez, from then on, was on thin ice.

Either way, as all freshly drafted quarterback selections do, Geno Smith represents a new hope for the New York Jets organization. Much like McElroy, whatever becomes of Geno Smith is irrelevant as of right now for the history books. As whatever the outcome may be, Mark Sanchez and the colossal bust he's become will be the tagline in it all.

Come Fall I believe we'll see David Garrard with Geno Smith taking over later in the season. And no, I do not believe Mark Sanchez will suit up for the Jets this season.

Whatever occurs, after the New York Jets selected Geno Smith, ironically, it is now Mark Sanchez who is on the clock.