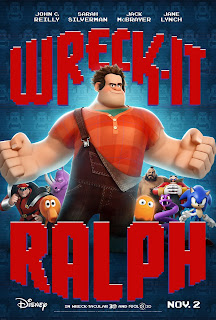 A usual video game villain sets out to attempt to earn a medal to validate him as a "good guy", but eventually brings havoc to the entire arcade where he lives.

After breaking into the create-a-kart factory, both Vanellope and Ralph go through the game of making a go kart for Vanellope.

Why are animated movies so much well put together than those with real actors? Whatever the reason may be, Wreck-It Ralph is another awesome movie from Disney. If you are a fan of animated movies, as well as a fan of video games, you will surely love this film.

Wreck-It Ralph is the Toy Story of videogames bringing the world of arcades, video game characters, and the quirks that come with videogames to life. With characters coming to life after the arcade closes, it's a nice touch that sets up unique dynamic for the film. From pacman, Zangief, Bowser, and others, its nice to see how they are used in the film. Also, the motion advertisement of Sonci the Hedgehog in "Game Central Station" was another  unique concept.

Besides the usual cute humor, and the great storytelling, as always, Wreck-It Ralph offered a great message in the difference of being a good and bad guy.

All in all, another well recommended movie.