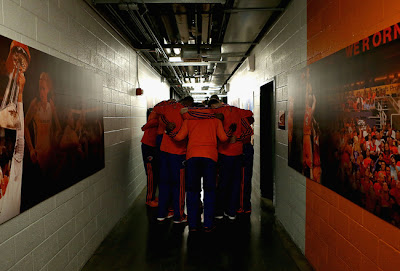 Since 1994...It's so hard to imagine that my beloved New York Knicks haven't won the Atlantic Division since then. It has been nineteen years - count em, nineteen! - since we have accomplished this feat. Heck, even the Toronto Raptors and Philadelphia 76'ers have managed to do so! Double heck, I was nine when this last happened!

So yes, it's been a long time since 1994. I won't even go into how much my life has changed since then like I did with the Knicks playoff win last year (Knicks First Playoff Win in Eleven Years - Finally!!!). However, as a die hard that has stuck with this team through the darkest days, I'll be lying if I didn't admit that this minor goal feels awesome.


To some, they might scoff at the idea of Knicks fans celebrating a division title. However, to come from where we have, and to finally be able to have a shot - a real shot - at doing something legit in the playoffs...this is just downright awesome.

It really feels like the clouds have passed over Madison Square Garden and Knick fandom. While, we aren't in the clear as of yet, and am in no way suggesting that the not-talked-about Knicks curse has been lifted (Cursed? A Knicks Rant Following Game 2), it seems like good things are beginning to come our way. Beginning to go our way.

And because of that, I am definitely going to enjoy this. Because this goal is for the true Knicks fans. Not the ones who suddenly jumped aboard now that things are rosey, but the ones that sat through the Scott Layden years, the Isiah years, and the two years of clearing cap space to rebuild this entire shebang.

This is for the fans that dealt with Clearance Weatherspoon, Shandon Anderson, Michael Sweetney,  Antonio McDyess, Frederic Weiss, Stephon Marbury, Eddy curry, Jerome James, and on, and on, and on...And oh yeah, did I mention Isiah Thomas?

As the playoffs near, everyone has expectations for their team, and experts, for this New York Knicks team. Many believe it will be a New York Knicks/Miami Heat Eastern Conference Finals. With some Knicks fans believing the Finals are a real possibility.

As for me, call it aiming low, but I simply want to win a series. That's all. I just want to get out of the first round, and then enjoy the ride as it happens from there. If we get to the Conference Finals, I'll deal with those expectations if/when we get there.

While a few more banners would be nice to hang at the end of this season, I plan on taking it easy and enjoying the one I know for sure will be up in the Garden's rafters come next season - 2012-2013 Atlantic Division Champions.

For passionate fans will understand the accomplishment. But only true and loyal Knicks fans will appreciate what this means.