Discovering and Apologizing to Hockey 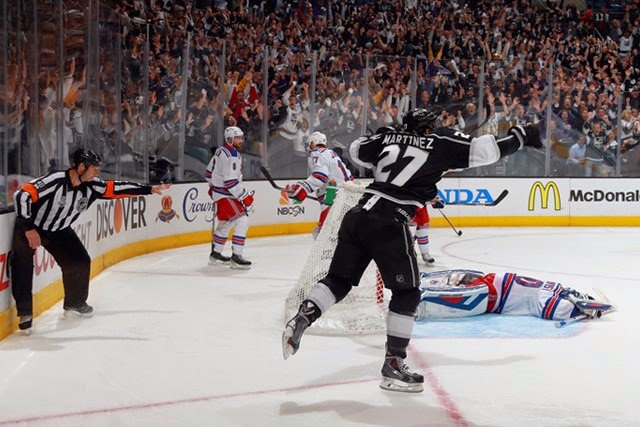 So let's talk hockey. What?! Yes, hockey. That sport played on ice that is often ignored by many. As one of the many who participated in the longtime wave of the hand towards hockey, I write these words with such a different outlook, a different feel, a different interest in the game. For in the year 2014, I've watched more hockey than I've ever done in my life, probably even more so than a combined lifetime total, and can honestly say I've enjoyed it all.


However, game five of the Stanley Cup Finals between the New York Rangers and the Los Angeles Kings might have been THE game for me that locks me into the sport for the rest of my life. If you're a sports fan, or even a hockey fan, there really isn't any need to explain how great last night was. Thrilling. Captivating. Fast. Intense. Heart wrenching. Everything you could want from sports, and so much more. I consider myself a very fringe and extremely casual fan of the Rangers only via my connections to this city, and even I was a bit bummed following Alec Martinez's championship-clinching goal. I can only imagine how die-hard fans feel on this Saturday morning.

Hockey has my undivided attention tonight. And I must say, I'm not upset about it. Its been a fun season to attract us casual fans.
— Dome Pondering (@DomePondering) June 12, 2014

But this year truly was the perfect opportunity for casual fans, especially in this city, to truly grasp, embrace, and flat out get into the sport of hockey. The Rangers were by far the best team in town, and with very little drama surrounding the usual suspects, the spotlight was on the Rangers. And not only did they deliver, but the games were damn good. Really intense stuff.

I touched base earlier this year on how Olympic hockey was usually the only time I got into the sport. Because it really was. And then of course, in my trip to Nashville, a industry colleague and friend of mine sat at a bar and watched countless games for hours on end where he explained the game to me (2014 Bucket List - #15 Watch an Entire Hockey Game on TV). Not just the more in-depth rules, but the plays, the strategy, the placement - basically making sense of what looks like random chaos on ice to everyone else. It was hockey 101 and even more, as he really knew the game. In my opinion, this is what hockey fans should be doing to help grow their sport, rather than complain and gripe about the NBA all of the time.

Hell of a game. I may not love hockey, but tonight's game definitely was THAT game for me from the sport.
— Dome Pondering (@DomePondering) June 14, 2014

And then of course, this series started. I casually watched game one. Then two, then before you know it, it became appointment TV. I'm sure the wife was shocked when she heard me say, "Hey, the Rangers are on, can you flip the station?" I know those words tasted a bit weird coming out of my mouth. But I never once regretted it.

Last night's game was tremendous, and will always be the moment I realized that I can dig this sport. I may not love it the way I do baseball, and can probably do without the legalized fighting, but it's now a very serious option of interest due to sudden appreciation and understanding of the sport. And yes, it will no longer be ignored.