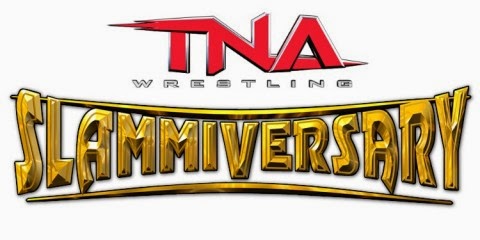 To say it was a tough night tonight for TNA Wrestling to host Slammiversary is very accurate. Maybe even understating the situation. With plenty of options on a Sunday night which also included Game 5 of the NBA Finals - not to mention on Father's Day - TNA had plenty of built in excuses which could have crept in mentally for all involved in tonight's event.

With that said, kudos to the staff for delivering a fun night and not giving in. The Texas crowd was fantastic and really seemed to just have a good time with the product. There was a lot of pressure for TNA going into this show to lay the foundation for the product heading into the summer. In my opinion, they did just that. Here are some quick thoughts from tonight's event:


- I really, really, love the X-Division. It's what set TNA apart for me when I tuned in for the first time back in 2002. I miss the days when the title and division was on par with the World Title and not just the "hot" opening act for the rest of the show. But I digress.


Regardless, these guys all came out and delivered and entertaining opener. Plenty of sick spots including that crazy, tangled suplex to the outside, and of course, that sunset powerbomb by Manik on Davey Richards. Everyone got a little offense in, but I wish we got to see more from Crazzy Steve, who surprisingly, was really over with the Dallas crowd. Hmmm, who knew?

- Kudos to TNA for replacing Lashley's theme with something a bit more hard-hitting, fitting, and recognizable. It also seems he's going by just "Lashley" now. They seem to really be getting behind him now, and why shouldn't they? IF they can hide certain weaknesses, he could be money for them. The dude is a legit athlete. Anyway, another good, hard-hitting bout that had a quirky finish, presumably to protect Joe, with Lashley picking up the win.

- I was surprised to see Magnus pick up the win against Willow. He really does - and desperately - need a significant finisher. That backdrop uranage slam move is not bad. By the way, the backwards jump splash off the top rope to the floor by Jeff Ha...err, Willow, was cool.

- I'm a fan of the Team 3D selection for the TNA Hall of Fame. I really had no idea who they were going to go with, but Team 3D is a perfect fit as guys at the end of their careers, legends in the business, and lets be quite frank, talent who are not yet inducted into the WWE Hall of Fame. Nice touch. They beat the WWE to the punch again. Lots of credit to TNA who really does have a legit, cream of the crop Hall of Fame shaping up.

- I had high hopes for Kenny King vs. Austin Aries. In fact it was my pick to steal the show tonight. It wasn't bad, but it wasn't the best on the card. Maybe my expectations were too high. Regardless, that brainbuster from the second rope - AWESOME!

- Speaking of awesome, how about Kevin Von Erich getting in the ring after the DQ? That was one of those rare special nostalgia moments only pro wrestling can provide. TNA should really put together a video montage of the names that have come through their doors. Despite the critics, it is very impressive for a company only twelve years old.

As for the Von Erichs, they looked pretty nervous, which is expected carrying that name and wrestling in Texas. However, there is something there, especially with the built-in wrestling lineage. I guess we'll see if this was just a one time deal.

So the Von Erich's return to the metroplex and win by DQ? This can't be true. I obviously no longer understand my 40 year vocation. WTH
— Jim Ross (@JRsBBQ) June 16, 2014

As for Jim Ross' tweet in regards to the Von Erichs winning by DQ - look, I respect JR tremendously, but I disagree with him. I'm guessing he didn't see the show and merely went off of results. The DQ set up Kevin's heroic entrance and allowed him to clean house. But whatever...I enjoyed it. Really, I thought it was fun to see Kevin get involved and it didn't seem like the crowd cared about the DQ win all that much neither.

- I'm not sure where the nonsense with referee Stiffler is going, but this was a little odd. It wasn't annoying or infuriating. just well...there. Still not sure what to make of that match. I'm sure there is more to this coming...I hope.

- Bully is awesome. Easily TNA's MVP to be honest. Loved the pace and flow of the Texas Death match. I understand the ending, but it felt a little flat for a match that was riding so high.

She's eventually going through a table, right? She has to at some point, no?

- As for Storm vs. Anderson, I was a bit worried when this match started as this is when most wrestling fans begin the mental math of time remaining on the show, and time remaining for the main event. That dreaded end of the PPV formula!

Nonetheless, this was kept short with the Dallas Cowboys getting involved (you knew that was coming, right?). However, much props to them as the scrum seemed chaotic and really made Storm look like a jerk. Then again, Storm is awesome as a heel. That line about them not being able to hit him was gold. Poor Tony Romo. Dude got blasted several times tonight and wasn't even there to defend himself.

Hopefully, both Storm and Anderson move on from here to do something else. After all, doesn't Storm still have a Feast or Fired Tag Title briefcase?

- Aries, Lashley, and EY was much better than I expected, especially down the stretch of the match. Acually, I thought it was a great match. The cage gimmick really didn't fit here, and to be honest, I hated the idea of using it, especially right after Lockdown. But the near falls was good stuff, especially the high spots of Aries' hurricanrana, EY's elbow of the cage, and Lashley going through the cage door on a missed spear. I love EY using the piledriver as a finisher. So old-school.

TNA delivered tonight. Who knows what the buyrates are, or who even watched, but Slammiversary was enjoyable. Though, I wished TNA played up Slammiversary and really used the show as a celebration, or at least played up the anniversary angle. It's the little things like that the WWE does so well in making their events seem like big deals. For a company that continues to defy the odds, even a show like tonight's, it's really something which should be celebrated and yes, appreciated.

All in all, Happy Birthday and Happy Anniversary to TNA Wrestling!