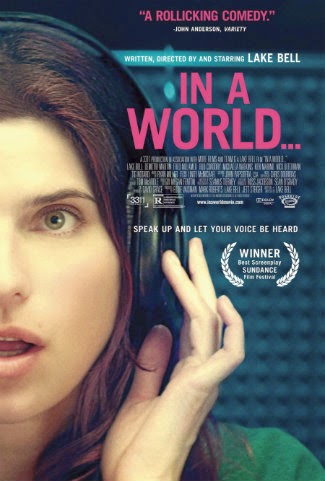 A woman struggling with her career eventually gets her big break and finds herself competing in the movie trailer voice-over industry with her legendary father and his protege.

Louis takes Carol on a walk to let her know he wants to be her voice over coach and produce her pitch for the big gig, and at the same time let her know of his feelings for her. After she starts walking away when she understands her father is also vying for the same pitch, Louis does an ADHD spaz out to get her attention.

"How does everybody know about that? I don't understand."
"The Russian community is really tight."

I've never heard of In a World, but I'm glad I had an opportunity to watch it. The film is definitely one of the many, many, many independent gems that are out here which never get any publicity or acknowledgement. Surrounded by a theme of the voice-over industry, the film's plot is rather simple, but definitely is given it's due for the comedic dry humor that fills the film.

The acting is rather superb, especially Lake Bell. Also, the random sightings of Eva Longoria, Cameron Diaz, and Nick Offerman in the role of Heners is entertaining. Especially Offerman without a mustache, which is just so weird.

All in all, In a World is a decent watch that is thoroughly entertaining, especially for a 90-minute run time.