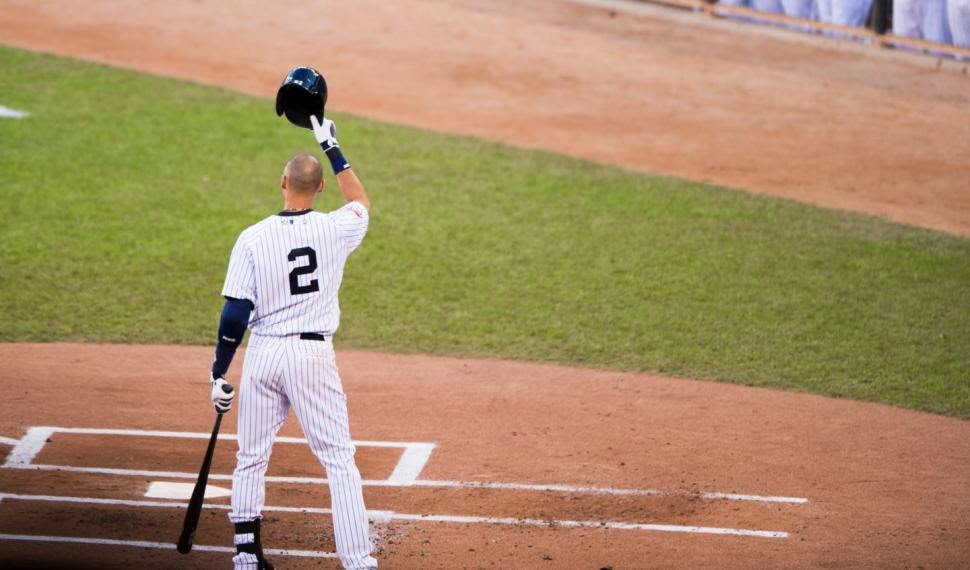 "Jeter is one of kind, and his retirement will officially end an era for the New York Yankees, and close the book officially on my childhood." (Jeter's Retirement Officially Ends My Childhood)

I wrote those words back on February 18th, 2014 when Derek Jeter released a statement telling the world that he was retiring after the 2014 season. As a twenty-nine year old man today, those immediate thoughts rang very true. For the last twenty years of my life - since I was nine! - Derek Jeter has been synonymous with my summers, with many memorable moments, and in many ways, a reflection of my own life in seeing him grow old.

To be honest, I still have a hard time wrapping my mind around the fact that he is 40 years old. Heck, I still can't believe my guy, Mariano Rivera, is also retired. But such is life. And that is exactly where we are. At the end of a chapter - more so a journey.

After all, among the many beautiful things about baseball is fact that we spend each night with our heroes on the baseball diamond. Whether it be in the ballpark or allowing them into our homes through the television, every night, we connect with them in some fashion. We grow old with them. And they become a part of our lives. It's a dynamic that is too hard to describe, wrapped in emotion, maturity, growth, and an inexplicable bond that only baseball - only baseball - can provide.


As these guys who framed the memories of my childhood ride off into a sunset, Jeter, being the last one, his departure is just that - closing the door on an era for a New York Yankees fan, and officially marking the end of a childhood. All of the dynasty years, the jump throws, the fist pumps, the dog piles after the World Series, the unhittable cutters, the glaring set of eyes piercing into a catcher's mitt, and so many more are now locked away deep down in our conscience and stashed away in our minds in a dusty box down in our mental basement labeled, "childhood".

With Jeter on the field, it was almost like we left it slightly open hoping to pile a few more in there. Or really, just so we didn't have to officially close it, and shelve it forever.

Nonetheless, Jeter has been everything any fan could hope for. What is there than can be said that hasn't been done so already? Class act. Respect. Winner. Clutch. Captain. Face of baseball. And so many other words of strong endorsements for a rare once-in-a-lifetime athlete. Rivera was always my favorite athlete, but Jeter always fell a close second. Go figure, number two.

Despite a dramatic walk-off tonight in his final game in pinstripes, which really felt like a movie right out of Hollywood in how it played out, my absolute favorite memory of Derek Jeter is indeed the famous flip play from October 13, 2001 against the Oakland A's. I'll never forget it - EVER! I'll never forget the way it made me hop out from under my blanket launching and jumping on my bed in celebration and utter disbelief of what had just happened. I'll never forget the call. It still burns in mind, as I'm able to recite it on cue:

"They're waving him around! The throw misses the cut off man -- shovel to the plate -- OUT AT THE PLATE! Derek Jeter with one of the most unbelievable plays you will ever see by a shortstop!!"

Sports have had some pretty remarkable things occur, but that still is, and probably will always be my favorite play ever. So dramatic. So clutch. So instinctive. So well...so Jeter.

And I know, the idea of using "Jeter" as am adjective is something I will have to explain to future generations to come, but doesn't it just work? An inside-out hit to right field...so Jeterian. Jump pass throw from the hole, "that's so Jeter". I think it's got a nice ring to it.

Regardless, I'm rambling because I know as I close this post, I officially close talking about Derek Jeter as an active player and thus all the goods and childhood nostalgia that goes with it. And yeah, I'm really not ready to do that. It's the same way I still hope some day Mariano runs onto the field in the ninth for a save. But it's not going to happen. It's time to let go. It's time to move on.

Thank you Derek Jeter for an awesome, an absolutely awesome twenty years. Thank you for narrating my childhood with your shortstop play. And thank you for being a big reason why I love the wonderful game of baseball so much.

Derek Jeter is on his way to hanging up his cleats for good. And with that, it's time for me to pack up the remnants of my childhood, shut the lid, and place it on the shelf - for good.