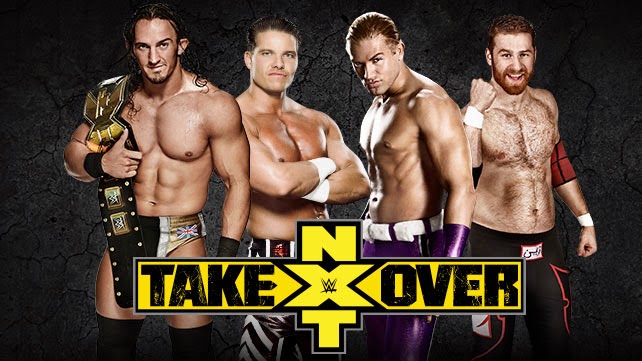 I've had the WWE Network since it's inception, and not to schill or hock the already annoying "$9.99" tagline currently being repeated ad nauseum by the WWE, but I do think it is indeed a good deal. Despite its benefits, I've never had the opportunity to take advantage of it's enormous library, or the airing of WWE's development organization, NXT.

However, on a rainy Saturday morning here in Brooklyn, NY, I fired up Vince's latest project and tuned in to the latest NXT special which aired this past Thursday. NXT has received mixed reviews from a few writers and fans evidenced by my Twitter feed, but I wanted to check it out for myself. As we know, interest in wrestling products are very subjective (and very bias), and the only way to draw an opinion is to check it out for one's self.

In doing so, I have to be honest, I'm so down on the WWE product right now, I felt NXT could either be more of the same of what we get on Mondays and Fridays from Raw and Smackdown, or something entirely different. From watching NXT Takeover II, it was a bit of a mixed bag, but really, much better than the two main shows are right now.


Here are some quick thoughts on the show along with some first impressions of NXT:

- Right off the bat, you notice that this "development" league has twice, probably thrice the amount of production as TNA or ROH. The WWE is king when it comes to production and has done an awesome job in improving and dressing up Full Sail University with flood lights, LCD scroll boards, and a big screen. NXT still seems big time despite it being a development franchise. I'm also a big fan of the yellow color theme, especially the darkened mat which really gives it an old school feel theme.

- The announce team of Tom Phillips, Bron Buxton, and Renee Young is...OK. I like Tom Phillips as he seems less "cheesy" than Michael Cole can at times. Buxton didn't add much, and there were times where Young added a nice touch, and times her comments seemed a bit forced. However, overall, again, not bad. The crew as a whole feels like they are having fun as fans of the product and nowt filling certain "roles" or saying the "right thing" like the main roster's crew.

- The Ascension vs. Lucha Dragons tag match was a great opener. The Ascension already look and feel like a team that ought to be on the main roster. They just stood out from the program. In fact, in my opinion, they seemed and felt more big league than anyone else on this show.

- I love a good squash match once in a while. Call me crazy and from the old school train of thought, which contradicts today's philosophy, but squash matches help a character at times more than countless and pointless backstage segments.

As for Baron Corbin, the fact he didn't get an introduction and then completely destroyed CJ Parker was a nice touch. Even the wife, who walked by as I watched this and was intrigued by the "New Wrestling" on the television (to her at least) as Corbin put away Parker with that sweet finisher.

- I'm just going to admit it, I find the act of Enzo Amore and Colin Cassidy to be awesome. It's new, fresh, catchy, engaging, and absolutely hilarious! His match with Sylvester Lefort wasn't the greatest, but his character made up for it. Especially, the second segment in revealing the effects of the "hair removing potion". I miss old school southern wrestling fun like hair vs. hair matches.

- The crowd at Full Sail really seemed into the product and well connected with the characters. I don't know if that's due to genuine interest in the product, or WWE drummed it up with handing out fake signs and such, but it was good to see a serious engagement in the NXT product from fans.

- I'm sure WWE-only fans have no idea what they truly got in the signing of KENTA. However, his debut was alright with him clearing the ring of the Ascension. I don't care for the rename of Hideo Itami, but this is the WWE - you know, that whole "best for business" ideal. I do wonder what the random name generator will spit out for Kevin Steen. Any guesses?

- Bull Dempsey seemed alright, but Mojo Rawley was well...yeah. Not the greatest. Weird gimmick too.

- Charlotte (Ric Flair's daughter) and Bayley was a good match. A really, really good match. Actually, and sort of shockingly, it was much better than anything you would get from the women on the main roster. Bayley's top rop hurricanarana was really cool. What really delivered this match was actually the backstory which of course, I got in the video package before the match. Well told, simple, and created an easy set-up of the lovable character versus a prodigy, blood lined wrestler. No Jerry Springer. No shenanigans. Just two distinct characters and one title with a score to settle.

Also, I'm a fan of the Bayley character. It's unique in a weird way, but not as head scratching as Emma's silly dancing. Bayley is excited to be a wrestler, and she is having a good time with it. Again, all-around good stuff. She eve looks the part as a the adorable fun-loving wrestler.

- Speaking of good stuff, the main event fatal four way for the NXT Championship might be a top three favorite match of the year for me. This entire ordeal was fantastic. From the near falls, the storytelling, the athleticism, and the ending. I thoroughly, thoroughly enjoyed this match.

I didn't see the tag match on Raw, because, as I've stated, Raw really has been passable for me. as of late. Nonetheless, Adrian Neville is impressive. He really seems to fit the mold of someone that may be a top guy in a company like say ROH, which is why I was shocked to see a talent like him leading the way under the WWE umbrella.

Tyson Kidd is well, Tyson Kidd. Nothing "development" about him, but he is showing what he is capable of doing if given the ball. The whole "Nattie's Husband" chant and him wearing headphones to the ring is a nice touch to the character.

Sami Zayn, or El Generico for those who remember, is well beyond this as well. Though you sometimes have to wonder if it's better to have a favorite wrestler headline a small promotion or get lost in the shuffle in WWE's current stationary program that is Raw.

And Tyler Breeze's gimmick is tremendous. Even better was the story of him sneaking in to attempt to gain the pin fall throughout the match. His disappointing reactions were great.

With KEN...er Hideo Itami, Kevin Steen, and Prince Devitt (we await their new WWE generated names), and a host of the current NXT talent such as Neville, Zayn, Breeze, Charlotte, Bayley, and The Ascension, there is indeed hope. I for one am tired of Randy Orton, John Cena, and the same song and dance on the main roster. But that's more of a creative issue, and another post, for another day.

Regardless, NXT seems like a tremendous product which has really taken off. Kudos to the WWE on that. NXT is on my radar, and now, so is the future of the WWE.