The NFL Has No Moral Compass 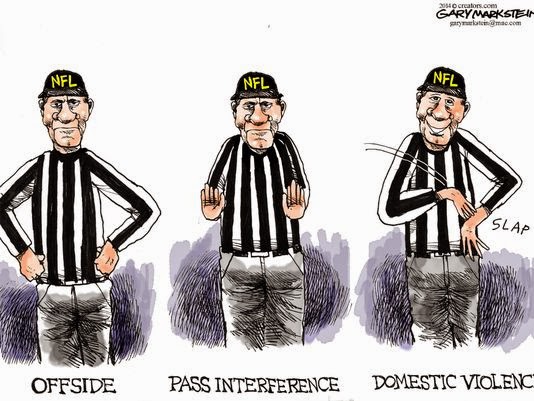 When I punched the keys last week on the National Football League's arrogance in handling the Ray Rice situation (When You're King Like The NFL, You Rule and Are Pardoned), little did I think their overall lack of discipline would ever get this bad. After all, like I stated in that post, the NFL is king, and quite frankly, one of the biggest corporations in the nation.

However, after the Ray Rice bubble burst, other bubbles began to surface and are now front and center. With the spotlight on the NFL now with multiple domestic abuse cases, including the hot topic of Adrian Peterson and his child abuse indictment, I don't remember the NFL ever taking such a public relations hit in my lifetime. Seriously, ever. For as long as I can remember, the NFL was considered the "model" league.

Now, there is no reason for me to defend or to even support the ethics push against Adrian Peterson. Truthfully speaking, spanking is one thing, whipping and harming is another. Just my view. Just blogging. Adrian Peterson is wrong. And while he doesn't believe he is, and many like Coach Tony Dungy and Charles Barkley would add - truthfully as well - that such disciplines are prevalent in the black community in the south, it's still just wrong. Especially at the point where your children are banged and bruised up.

I don't have kids yet, but the best parents I know always seem to discipline out of love. Wrapping a "switch" around your kids leg and injuring their scrotum is far from that.

From the evidence revealed, there is clearly an evil and twisted side of Peterson that is abusing these children. Which is ironic, considering he lost a child not so long ago to child abuse.

Nonetheless, what continues to be the running message in this case is the complete ineptitude of the league to get out and in front of these issues. Or at the very least, make a statement. Where is Commissioner Roger Goodell? Instead the league continues to flounder lackadaisically.

The Panthers announced Greg Hardy was going to play, then suddenly reneged and placed him on this suddenly newly created "Commissioner's inactive list". The Vikings took the sneaky route by claiming Peterson would be suiting up "as they awaited due process", and now suddenly have placed Peterson on this same list. The list is a nice creation, and is necessary in pro sports in today's times (unfortunately), but give me a break on the decision making. What an absolute joke!

The Vikings organization recently admitted this as a mistake in judgement, but the NFL as a league seems solely to be swaying based upon external forces, and not their own moral compass. For every step of the way through this controversial time, the league has waited for which way public opinion swayed, then suddenly reacted upon that.

What if there were no Twitter? No twenty-four hour sports stations? No sports radio? No sports blogs? Would the NFL even have considered doing the right thing? Probably not.

Even making maters worst, is that it took pressure from large sponsors who made public statements against the NFL to force them to give a damn. So sad.

Quite honestly, I am no longer of the belief that the NFL is the "best run" league in American sports. There is no hyperbole or a cause of overreaction in that statement. I no longer believe it to be true. If the bottom line of a balance sheet is your deciding factor, by all means the NFL is the choice and your answer. But as a league, one that cares for it's players, it's fans, and for those it affects - I'm not buying it anymore.

But I will say this, the one silver lining in this entire situation is the affect this will have on not just the NFL, but sports in general. Will general managers now think twice about drafting or signing the player with the checkered past? Is it worth the risk?

Parents swaying their kids from football have already begun, will this continue? And I wonder if more parents will now monitor and guide their kids through picking their heroes who appear on the gridiron every Sunday?.

Will the game suddenly turn away a large and engaged female fanbase?

Sadly, part of me keeps coming back to the same train of thought - The NFL is king. It's too big. Too popular. Too ingrained in our culture. It's a massive entity that can survive these hits.

Will the NFL truly learn from this situation, or are they just looking to get through the current storm?

That's the scariest question of them all.