Dome Pondering Movie Review: The Girl in the Book (2015) 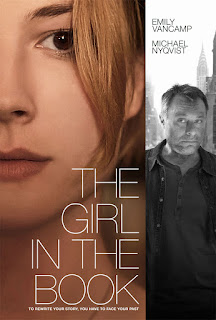 An aspiring writer must deal with her past and overcoming "Wakening Eyes" in order to help her overcome the demons of her present, all while, freeing her from writers block to pursue her dream.

After hurting many around her due to her insecurities, Alice is left on her own as Sadie finally detaches herself and requests that she'll need time away from her. This leaves Alice alone to overcome all of it.

Emmett: Are you the girl in the book?

The Girl in the Book is a solid film. There isn't anything overwhelming about the film, it's just solid. The plot is decent (and at times troubling), and the characters are tough to really get behind, except for Sadie, who seems like the type of friend everyone wants to have.

While yes, the topic of pedophilia wants you to direct your anger at Milan, there are several others who come out looking like an antagonist in the film, especially, Alice's father. Even Alice at times, you may not want to root for.

However, the film does provide an interesting outlook in overcoming and facing our past to move on.

The Girl in the Book is a decent watch if you're rummaging through Netflix. That's what I did, and it served just that.