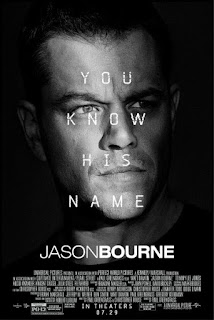 After going into hiding, Agent Bourne is drawn out of hiding to discover more about his past.

After things come to a head in Las Vegas, an epic car chase ensues as Bourne goes after the man who has been trying to kill him, and the man who killed his father.

Jason Bourne: I know who I am. I remember everything.
Nicky Parsons: Remembering everything doesn't mean you know everything.

Okay, so maybe I was scarred from the previous edition of Jason Bourne. Yeah, remember "The Bourne Legacy"? Yeah, I try to forget as well.

That film wasn't awful, but it simply steered the story and blemished what is one of my favorite series in films. Excited about this one to right the wrong, I'm still not sure if it did just that. The plot was nicely written and set-up, and it included everything you wanted from a Bourne film, but there was just something for me that was missing in this film. I'm not sure what it is.

Matt Damon, as always, is great in the role. No protests there. Overall, I just feel like we were watching a post-glory rendition of our favorite hero, like say every Rocky post-V (or IV...because, you know, Tommy Gunn), instead of an additional element into the continuing story of Jason Bourne.

If there is another one, then maybe this feeling will change.

All in all, Jason Bourne is a good movie. It really is. For me, the bar was set so high that this one might have felt short...or hit the bar and fell forwards. Still thought, give it a try.