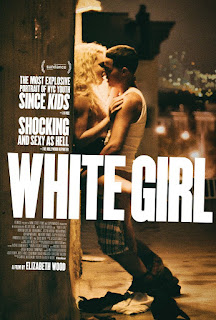 After a night of partying, a sophomore girl falls hard for a guy she just met in an ungentrified part of New York City, which leads to an array of issues as she attempts to get him back.

After getting arrested, Blue stares at Leah intensely, evoking so many thoughts within the plot, and externally in real life, for the viewer.

White Girl is a very good movie, but I'll admit, it's not for everyone. Truthfully, with all of the sex and drugs scenes in the early part of the film, I wasn't sure exactly where the movie was going and did have thoughts about just ending it. But I'm glad I continued through.

The film, directed by Elizabeth Wood, and based off her own college experiences, touches heavily on the plight of white privilege, and even dances on other themes like the male dominating patriarchy found in certain situations. As the film concludes, the entire thing comes full circle and helps you put in place the experiences of each character, especially Leah and Blue. Despite being connected and having affection, for Blue, the whole thing was serious and about survival, and for Leah, trapped in her white privilege, everything was about fun, partying, and as she states "I always figure it out".

The last scene even evokes that sentiment where Leah's life continues as normal, and Blue, well, he becomes another statistic.

Morgan Saylor was absolutely terrific in this film. I didn't know much about her before this, but she definitely embraced the role and portrayed it very, very well. It reminds me a lot of Michelle Williams' effort from Blue Valentine.

Again, this film isn't for everyone. Lots of heavy and graphic stuff, so beware. But, it definitely is for purpose as it sends a very heavy message regarding white privilege in our society.