Stuck with Melo, For Better or For Worse 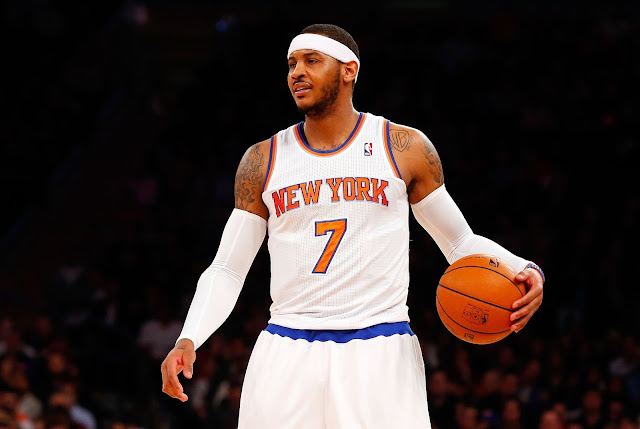 Haven't we been here before? The Knicks on a losing binge. Some ridiculous scandal or scenario that only happens to the Knicks occurs (see: Derrick Rose). Not even a whisper from Phil Jackson and/or management about the losing or said wack scenario. Carmelo Anthony looking like an overrated superstar. And as always, Knick fans growing frustrated with everything that is Knicks fandom.

Yup, I'm there with you all.

Of course, as each year goes by, the contentious argument that is Melo's tenure as a Knickerbocker ensues, with the latest being that Phil Jackson is not too fond of Melo's game, perhaps even wanting to find a way to get rid of him.

And as expected, they met, and Carmelo Anthony reassured us all that he still wants to be a Knick. Wash. Rinse. Cycle. Repeat.

It seems with A-Rod out of the sports realm, Carmelo is attempting to make a push to replace him as the most controversial figure in New York. Instead, really, Melo is playing himself into a legacy of being possibly the most overrated player in New York right now. I truly mean that.

I've stated in the past that Melo is indeed a talented player. He's a great scorer, an above average rebounder, and a great passer - you know, when he feels like giving up the ball. However, it's his selfish play which really hurts and bothers Knicks fans. His unwillingness to give effort on defense, his constant love affair with iso ball, and of course, his lack of leadership, or even more so, what he thinks is leadership.

Melo will always have the hearts of Syracuse fans (obviously), but here in New York City, he's the advertised "superstar" that is an example of empty promises and fools gold. The forced "favorite" by management, especially so when they fabricated his ties as a New Yorker. "He's coming home" the Knicks marketing pieces pleaded, as they attempted to play up his Brooklyn-birth. But the false beginning image just set Melo up for failure, and lofty expectations he was not bound or capable to fulfill. He's forever been a paper people's champion within Knicks fandom.

He then became the guy that ran Jeremy Lin out of town to crush Linsanity, thus, refusing to share or exist under it's seismic shadow. He's the "superstar" who only enjoyed winning with the Knicks once elders like Jason Kidd, Rasheed Wallace, and Marcus Camby provided the leadership and lead the way. He's the guy who sits out half a season just to come back and play in an All-Star Game prior to having season ending surgery. He's the guy who sits out a game against the Warriors to rest up for his return to Denver against the Nuggets.  He's the guy who now battles the growing sentiments of not even being the best player on the team anymore (see: Mr. Porzingis) and throwing fits when he doesn't have the ball down the stretch like he used to. And really, he is the one who many believe likes having the crutch of "never having the talent around him" tied to his reputation - or at least, an argument for his lack of success.

It's sad. Because, he's the kind of talent you root for. We've all seen this type too often. The guy who is missing that intangible to bring it all together to become something really special. He flashes this specialness it on some nights when he's motivated. Or when he goes through his whole "I'm looking to pass more" phase at the beginning of every season, which honestly, reveals how great of an overall player Melo is when he's engaged - completely. A really, really awesome Melo lies somewhere inside. How does a coach unlock that beast and keep him from hibernating until the next Summer Olympics is beyond me? But Melo can be a really, really, really great player, when - WHEN - he wants to.

I do believe that. But I also do believe until that cheat code is discovered, he would make a better Robin to someone else's Batman. But the fact of the matter is this, we're stuck with Melo. He's not waving his no-trade clause and even then, you're not getting what you want in return because of the structure of his contract (Thanks, Phil). And truthfully, how many teams are willing to really deal for him?

Ideally, somewhere down the road, Melo might be coming off of another team's bench in full championship chase mode. Imagine that?

But regardless, here we are, another painful season full of agony, drama, and complete Melo dissection. And of course, for all Knicks fans, another heart-wrenching season of going nowhere, really, really fast.

When do pitchers and catchers report?