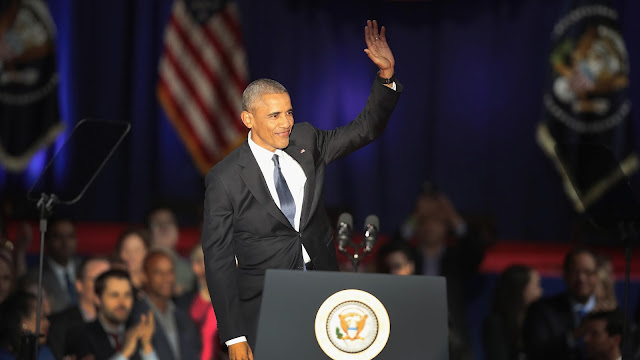 Watching President Obama's farewell speech brought so many emotions and feelings to the forefront. Like everyone who supported the 44th POTUS, the evolution of his Presidency can be traced parallel to our own lives. Where we were when he won the Presidency, how we felt, and of course, what it means in the grand spectrum of our beings, and in our world.

The latter I wont even attempt to tackle. It's too deep and too extensive to capture on this blog. Ta-Nahesi Coates did a tremendous job doing so in his piece, "My President is Black". Definitely give it a read if you can. Very much worth your time.

As for where we were and how we felt, of course, that depends on you. For me, I can share with you that much of my adult growth and progress has been in an America lead by Barack Obama. I was 23 when he was elected, and I write this as a 31 year old man excited that I can one day tell a potential son, with honest fervor, despite the color of his skin and the burden that comes with said brown skin in this country, that he can be President. Many still do not understand the power in that access and truth. But such is life. Such is our road to overall empathy and racial understanding.


From my own experience, I remember at twenty-three being excited by history, but at the same time worried about dealing with a recent layoff, and how further issues around the country would progress in my lifetime.

I of course got my answer in the world that developed around me, lead by him. Its not all perfect. I didn't agree with of all of his outlooks and policies. There are times I wished and hoped he did more. There are the issues of educational equality and social justice, those of which I am so passionate about, which I felt continued to be ignored in the oval office. But again, he is just one man, not a magician. Our country has many problems, some of which can only be solved by us, by Americans - we, the people.

But there is more to Obama than his hope and his barriers. You know what I will miss most about Barack Obama as our President? His poise, his grace, and overall, his integrity. He stayed true to himself under the tremendous amount of distress, and yes, the racism included in it, all of it so visible in the salt and pepper that sprinkles the top of his aging head.

I'll also miss his speeches. Obviously, I love communication, speeches, and as you can tell, debates. Obama is one of the greatest orators in my in my lifetime. His style, his dictation and annunciation is signature, especially his use of humor, timely pauses, and when called for, sarcasm, is impeccable.

I'll also miss his ability to be human. From playing basketball, to his interaction with children and everyday Americans, Obama never gave off a vibe of being "Presidential" or of being more important than you, me, and all of us. I've always admired that, and always will.

And of course there is the first lady, Michelle Obama, who comes and supports the platform that is President Obama - she is probably the most bad ass woman I can honestly think of in my lifetime. Again, I mean that. Not hyperbole at all.

I never expected to completely capture how it feels to have had the experience of President Obama in this post. Maybe someday I'll be able to better capture it, possible once we can let his presidency settle in and allow time to judge it.

But for now, like Coates' article is titled, I'm tremendously proud to say that My President Was Black. And most of all, I'm proud to have viewed a President in my lifetime that felt and represented a part of America that is often not realized or captured on a national stage. A part that as a little boy in Brooklyn, NY, often felt like "my America" was never the one being discussed on the television.

I don't know what the future holds, but I know, I'm gonna miss Obama as my President. But I very much look forward to the projects he has lined up for the future.

March 25, 2022
Today,  I push to leave on time, to place my ambition on rewind,  to conquer a list,  to feed the drive, to escape amiss Someday,  I'll work to return home soon, with purpose in tune,  to pursue the extent,  to feed my heart, for Today, I repent.
Read more
Tweets by @DomePondering