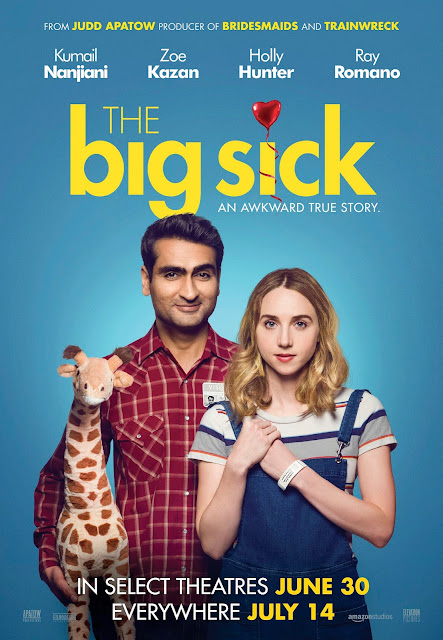 The true story of Pakistani-born, Kumail Nanjiani who falls in love with Emily. After she becomes ill with a mysterious illness, Kumail must come to grips with various truths and culture clashes he's been avoiding.

After trying to avoid taking Beth's parents with him to his comedy show, he eventually has to drag them along which turns into a spectacle as Beth gets into it with a racist heckler.

Kumail: So... to fully know I love someone, I have to cheat on them?
Terry: Out loud, it sounds stupid. Eh, it's... yeah, that's terrible advice.

The Big Sick was just a let down. It really, really was. After reading the description of the film and then viewing the start of it - everything else was just downhill. Not in a tragic this-film-is-terrible-kind-of-way, but it certainly did not apex after the beginning.

Why? Well for starters, the characters all felt shallow and underdeveloped. Not once did I feel connected to any of them. At all. The only one remotely that carried that feeling was Terry. Again, it wasn't in a bad way, it's just that we never got a good grasp of the depth of Kumail and Emily's relationship to ever consider the plot interesting. Just me...

Again, it's not a bad film. It has it's moments that were funny, and of course raises some interesting tidbits on cultures and cultural habits, but other than that, this one was just there for me.