We Can Change This, But Will We? 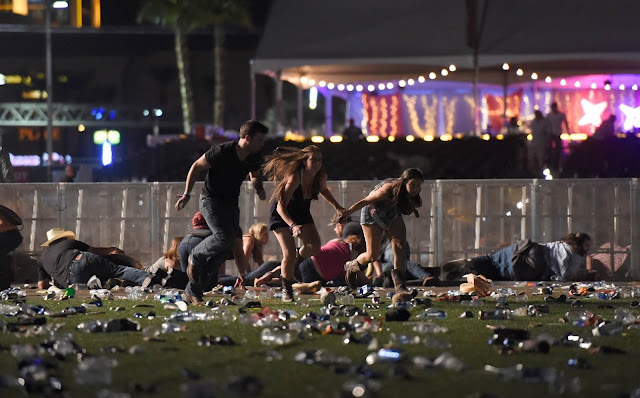 It's easy to say, "Pray for Vegas". Despite the actuality of doing so, it's also become so common place in rhetoric. Soooooo...you know, the thing to say to encapsulate our feelings, or even, to fill the void of what we're afraid to acknowledge - we CAN could have stopped this.

There is a part of me that sits and writes this very post, finding myself in a mental daze, almost a somber state of mental over-paralysis by way of the evil doings and human shortcomings in the world.

As of late, it's been Harvey. Irma. Maria. Houston. Florida. Puerto Rico.

There are protests. Taking a knee. Injustice. White privilege. And "patriotism".

Not to be forgotten is Chicago. Immigrants. Charlottesville. And of course, Flint.

They have YET to receive water. Clean water.

Can we just get Flint some damn, clean water?

In the midst of all of that, the world just feels like hell dripped some of it's acid onto us. Or was maybe punctured in some fashion, and some of it came oozing out up here.

But again, we CAN stop this.

That's what is so frustrating and exhausting in it all. That we, especially us Americans, are so wrapped up in our "meaning of loving country", have been instilled with such hate and violence - the very foundation of America, whether we like it or not - that we cannot seem to shake it and provide love for one another.

For some reason, despite our "thoughts and prayers", it is our hearts and minds that need to catch up to the actual meaning of our idle comments following tragedies.

While Puerto Rico begs for help, our government doesn't deem it an emergency.

While white supremacy establishes itself, our President doesn't refute it.

While some are attempting to bring light to the injustices of people of color in this country, others want to discuss "respecting the flag" and false "patriotism traditions".

While people around the world are looking to live freely, ISIS continues to recruit in it's attempt to snuff out this way of life.

And now, while it is yet another record for the largest mass shooting in American history - just one year after the last "largest attack", we refuse to acknowledge the topic of gun control.

Or the fact that white bodies are terrorists too. But I digress in that direction.

I wish and hope for change, but truly, Sandy Hook was my point of no return, and signified all lost hope. If we didn't change when children were murdered, would we ever? Will we? Hopefully...

Yet, here we are with "thoughts and prayers" and our hearts and hands so deep in the pockets of the NRA.

This is especially true as you no longer need mental examinations to receive a gun. Maybe the soon passing legislation to allow easier access to purchase silencers - yes, the thing that makes the gun go chew! chew! Chew! Because you know, guns, freedom, and 'Merica!

I'm sure you felt my eye roll at this moment.

...or maybe that was me taking a knee.

But yes, here we are. I do planning on really praying for Vegas tonight. And obviously by this post, this situation is indeed in my thoughts.

But really, again, are we going to do anything about it.

Like, for real this time. I'm tired of the same song and dance.

We can change this...we so can.

We really, really can.