Damn, I Love This Team Damn. I love this team.

I don't know what it is, or what spurred this immediate attachment in Spring Training, but I just do. Maybe it was the idea of hope and all of the wonders and excitement it brings. You know, when your squad finally ditches the old expensive brigade and gives the keys to the prospects we've been hearing about.

Maybe that was it.

Or, maybe it was the excitement produced by Gary Sanchez just the year before. And the near-miss of the playoffs the team teased the year prior.

Or...maybe it was just the idea of dancing around the word "rebuilding" and having no (not low) expectations for the 2017 season. Quite frankly, we were playing with house cards, and that's a fun position to be in as a fan.

Of course, Judge happened (Sooooooo much fun). And it happened 52 times - really 53 if we count that one home run that didn't get counted and was ruled a triple. But whose counting?

And one of my favorites in David Robertson returned in pinstripes as well.

But it's just the right mix of young and old talent, along with a fresh new swag of Yankees that Tweets emojis after games, fake interview themselves in the dugout after home runs, and rally behind the thumbs down mojo. By the way,  much thanks to that odd looking Mets fan for the bulletin board material. It's a stark difference from the dynasty that spoiled me in my childhood that were business like in their dominance. 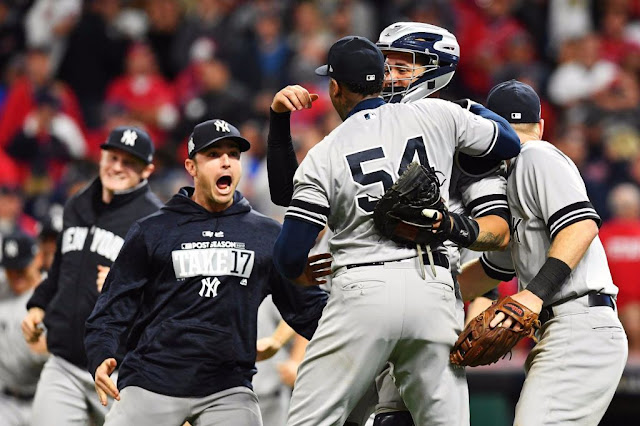 Honestly, I can't put my finger exactly on what it is. But it's been an extremely fun year. Of course, I'm hoping to get through another round - because if there is one thing in baseball that is guaranteed, it's that any stage of the postseason is not guaranteed. Go for it, as you never know when you'll get back.

Yet, I'm still at odds, because if you told me we would be in the American League Championship Series in April, I not only would have taken it, but I most likely would have wondered if you were the devil himself.

Regardless, I've been living and dying with this Yankees franchise since I was 6, and this series was one of the most satisfying and gratifying wins for me as a fan - 90's dynasty included. The comeback, the doubts from everyone - even the redemption story for Joe Girardi - all of it was such a thrill ride. And to be completely honest, left me a emotional mess each night on my couch. But hey, that's October.

Again, whatever happens in the ALCS, this one was special. And I'm so glad this season isn't over.

Because again, I love this team. Damnit. I do.