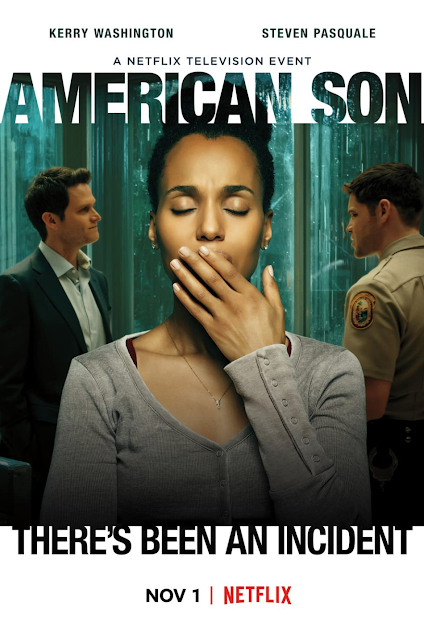 An estranged interracial couple reunites in a Miami police station in order to help find their teenage son.

Note: It's an adaptation of a play, so the film has long scenes and segments that are acts.

After Scott is carried off for booking, Lt. Stokes and Kendra have a very real conversation about the responsibility of black boys, their parents, and their presentation and interaction with the world - especially, law enforcement.

"His world is not your world"

America Son really surprised me. It ended up being more powerful and more entertaining than I expected it to be. The film's core of exploring the intersectionality of so many raw and sensitive topics is a strong one.

At first, the film felt over the top with a sense of forcing messaging down your face. It overwhelmingly felt like it was going to be about bashing police officers and law enforcement. However, as the film continues on, you realize that the opening encounters set up so much more that is obvious, including so much more that isn't.

From race to gender, to how relationships and internal bias carries our actions, the dialogue in American Son carries some weight that is sure to spur the thinking for some, flood emotions for many, and completely turn others away (due to political leanings - or the current climate).

Where American Son shines is the star-studded cast. Four actors just bringing it. All of them were so good in their roles. And yes, I still believe Kerry Washington to be so undervalued for what she brings to the table in film, TV, and theater. Let's give that lady her flowers.

American Son is not perfect. But there is just so much good work and raw insight that is not easily discussed like this in Hollywood to not see this film.