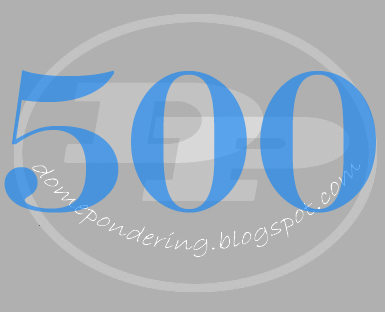 It's quite amazing to believe that this is indeed the 500th post here on the DP. It seems like just yesterday (yes, I'm using that phrase) that the DP was jump started again in 2006 after a 2004 crash that wiped out several hundred previously posted thoughts. Posts that are now long gone, somewhere floating in blogger heaven, that will never be read again. Following the crash, I vowed to host this very blog on a site with the capability to not only withstand my vision for it, but archive in a way that such a catastrophe can never happen again.

And with that came the Blogger era of Dome Pondering. An era that today celebrates 500 posts of bringing to you thoughts, reviews, debates, rants, pictures, imports, poems, and various other writings that I have found interesting in this race called life. An era, which I've mentioned before in Year in Reviews, has grown tremendously over the years in content, readership, Google searches, and overall interest.

Usually in these milestone posts, I like to give my favorite top five of the last one hundred posts, but 500 is a special number. A nice round number. An achievement that signifies a greater accomplishment that deserves a bit more than simply recycling the norm.

As I sit here and punch the keys celebrating what I guess we can now call, DP500, I am amazed (shocked, really) that I still have the passion and drive to blog. As I'm sure many of you have read in the "About and History" section, the DP started in 2001, when I was sixteen years old. It was during a time when "blogging" wasn't exactly as cool and cliche as it is now. Truthfully told, it was considered dorky, and blogging simply meant you had an virtual diary or journal. Not exactly cool or trendy as it is now.

In fact, it seems everyone is in on it. There are conferences on blogging. There are jobs revolving around blogging. And there are those that check blogs before they read actual major websites. I now have friends whose blogs I check as well. To name a few, my wife, who is now known as my tag team partner because of this blog, continues to show idiots like me how cool art and photography can be with her blog A-Pic. Then there is a close friend of mine who provides a place for the nerd in us all with video games, movies, comic books and all of the cool stuff we somehow attempt to suppress our love for as we get older in his blog, Nerds On The Rocks. Of course, there are many more...

And eleven years later, I think it's pretty cool to think I was part of something before it was, well, cool.

Likewise, it is very, very cool to look back on writings and posts that are now synonymous with precise moments and thoughts as I've progressed in my life.

For example, in preparing to write this post, I read a post I had printed on a piece of paper from 2002, where I seemed very confused about girls. Today, I can forward ahead ten years and look at something as raw and as descriptive as The Unity Road Writings and see my mature progression.

Nonetheless, this journey has been amazing, and most of all, truthful.

I've always said, there are two things in this world that I have never lied to - God, and this little blog called Dome Pondering.

As the journey continues, life continues to bring forth issues, wanderings, and yes, ponderings, that will continue to feed this blog.

As we move forward, I'd like to thank all of you that stop by here in the process of your website surfing to share, read, and even give feedback. From friends and family, to casual viewers, to that dedicated DP devotee in Indiana that checks in with us religiously (I am very aware!) - thank you.

I hope you all are looking forward to the next 500 and beyond, as much as I am.