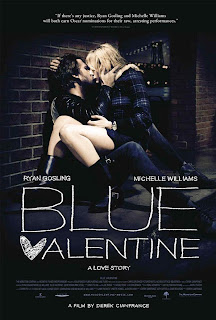 The journey of a married couple, their present, and how their past ultimately formed their relationship's future.

After returning from a failed night of romance, Dean shows up at Cindy's place of employment intoxicated, and begins to destroy the office and reek havoc after Cindy reveals that she wants out of the relationship.

Blue Valentine is a film that was heralded by many critics. In many ways their review was dead on as the film is of great quality, largely due to super talented actors, and Oscar nominated, Ryan Gosling and Michelle Williams. And yes, they were once again fantastic.

However, the true essence of the film is it's characteristics. Blue Valentine is raw, gritty, and most of all, authentic.

It's focus of depicting the skull and bones of relationships and marriages as well as the unfortunate evolution that changes the dynamic between the two parties involved, is rarely expressed in Hollywoord. This film does a great job of hitting real points and showing how the baggage two people carry from their past can eventually creep up after losing sight of the love that faded it away. The film also carries many lessons of the ugly truths that can lie in a marriage.

And although Blue Valentine is the thinking-type of movie that does not end with the usual cliche and leaving the viewer with a happy ending, there was just something missing for this viewer. Normally, I love these type of movies as I enjoy having interpretations and results left to the imagination of my mind, and while Blue Valentine offered that, it just seemed like there should have been more. Almost as if there was more to the story that should have been told.

To wrap it up, Blue Valentine feels like it was a snipet of a larger movie with added intensity and an unnecessary amount of graphic scenes.

Blue Valentine is indeed a good film that will force you to think about many issues and one that doesn't insult it's viewer. A solid film at best and against popular opinion, not exactly a film that should be placed on your shortlist.