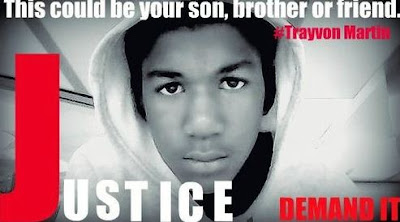 Sadly, it seems like these stories raise their ugly heads more often these days. Another young, black male dead. And the killer, off the hook without an investigation or any sort of stiff interrogation.

The story of Trayvon Martin is just another example of how racial injustice still exists in our communities, in our society, and even more worrisome, in our judicial system. In a nation where we strive every day to close the gaps between not just blacks and whites, but all racial groups, our government continues to send messages of our strides being insignificant.

The relationship between minorities and our law officials are a testament to this message. A relationship that is marred with disservice, betrayal, crookedness, injustice, and oversight for as long as we can remember has given and has entrenched a lack of trust between the two sides. And as a black male, I'd be the first person to admit several factors such as drugs in black neighborhoods and our failure to pursue and emphasize education, the divide remains.


Heck, honestly, the black community does more damage to itself through drugs, lack of education and violence towards one another than any race, person, group, body, or government can inflict or has inflicted on them. However, that is another post, for another day. A post I need to one day update and follow up on. (Calling It Like It Is: The Black Community Needs To Help Itself)

Nonetheless, it's the same thing, same deal, same way, all the time.

As I once posted on some thoughts regarding the Sean Bell fiasco (Sticking to the Script: The Sean Bell Verdict), these stories always seem to follow a script.

Black victim. Afterwards, we get stories of sketchy evidence, lack luster investigations, and then the disappointing result.

We saw it several years ago with the Jena 6. (The Jena 6: A Past Resurrects Itself...Or Does it?)

We saw it with Sean Bell.

We see it everyday around this nation in various racial profiling.

Like a broken record playing the same sad ol' song of our future being terminated for no reason and without justice.

The fact that Trayvon Martin was gunned down by George Zimmerman, a man with no other credential than being a neighborhood volunteer is disheartening. To hear that he was followed, terrorized, and killed before having to hear the final words of racial slurs directed at him is tragic and infuriating.

George Zimmerman? Well, he walked. No charges. A free man.


In the piece on Sean Bell, I briefly questioned what if the roles were reversed? Does the script apply? Or simply just flip?

After reading an opinion piece in the New York Daily News, the author, John McWhorter touches base on a recent story that gave a shocking answer. He stated the following in his piece:

New Yorkers will recall the case of John White.

White, a black man in his 50s, came out into his Long Island driveway on an August 2006 night to confront white teenagers who had come onto his property making threats against his 19-year-old son, Aaron, including ones to kill him. There had been an argument at a party, related to a woman.

White was carrying a gun. In a scuffle between White and 17-year-old Daniel Cicciaro, when Cicciaro grabbed for White’s gun, White fired. The shot killed Cicciaro.

White said that he did not intend to kill the boy. He claimed, reasonably, to have feared for his life and/or that of his son. Yet he was sentenced to two to four years in prison. Then-Gov. David Paterson commuted his sentence after five months in 2010.

White stood his ground — albeit in a state without a law by that name on the books — and went to the slammer.

At the end of day, if a middle-aged church deacon like John White with no criminal record has to spend even five months in the pokey for shooting a boy seeking to maul him and his son, under what conception of American justice — even before all the facts are in — is Zimmerman currently sleeping in his own bed?

Unfortunately, a small part of our society is too ignorant to decipher and solve this question.

For our society, I guess it's easier to simply follow the script, even when an innocent seventeen year old boy was killed.

What is wrong with us?