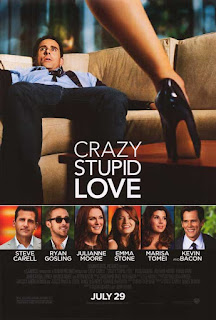 After his wife asks him for a divorce, a middle-aged man looks to rediscover himself and pick up women with the help of a womanizing younger man.

After a conversation in the hallway on parent teacher night that seemed to have put Cal and Emily on the road to getting back together, their son's teacher opens the door to let them in. The teacher, was one of the women Cal had picked up in his new womanizing ways, and lead to an awkward meeting.

"The war between the sexes is over. We won the second women started doing pole dancing for exercise"

Crazy, Stupid, Love is a film that is funny, and feels like a quirky twist on the cliche films such as Love Actually, Valentines Day, and New Year's Eve. This film, which takes a different route in the aura of love and its craziness, boasts a a plot that includes several twists and surprises that brings the film to head as it closes.

And despite a great cast which also includes Marisa Tomei and Kevin Bacon to the names listed above, the true standout of the film is Jonah Bobo who plays Robbie Weaver.

The film drags at times, and even offers a lack of development in some areas, but overall, the all-star cast comes through and puts together a decent movie that is funny enough just to keep you satisfied until the end.

All in all, Crazy, Stupid, Love is a decent movie. Very much worth the watch, but don't place this film as a priority.